FOUND are an artist collective / pop band based in Edinburgh. They are also one of the most exciting and creative new bands in Scotland right now. FOUND will return to New York for the CMJ Music Marathon later this month and last week a hungover Tommy and Ziggy spoke to Dear Scotland about the upcoming gigs.

Earlier this summer Tommy and Ziggy recorded a stunning Toad session with Matthew, some of which you can see below, and the rest you can see here. As previously reported (Found are Fucking Geniuses, July 29, 2009), the band also found time to invent the incredible Cybraphon, an interactive version of a mechanical band in a box. Consisting of a series of robotic instruments housed in a large display case, Cybraphon behaves like a real band. Image conscious and emotional, Cybraphon’s performance is affected by online community opinion as it searches the web for reviews and comments about itself 24 hours a day.
…
So I thought I’d give it another mention.
…
FOUND will be in New York at The Rose in Williamsburg on October 22nd, and at the Central Park Bandshell on October 24. More details following the interview:

Dear Scotland: Where are you now and what did you do last night?
Tommy: Sitting in my kitchen nursing a cup of tea, still recovering from Friday nights excesses (it’s now Wednesday)! On Friday Ziggy and I went to Kinky Afro, a night at the Sub Club in Glasgow. They were celebrating their 10th anniversary and closing party and we danced until 5 am with our friends. I vaguely remember doing some dire attempts at ceilidh dancing to Kinky Afro’s last tune ever tune – Teenage Wasteland by The Who.
…
DS: Paul McCartney said he got into music to avoid a job – and get lots of girls. What made you get into music?
Tommy: I got into music because I wanted to work for Paul McCartney.

DS: What is your favourite song of yours to play right now?
Tommy: I always enjoy the new songs. We’ve just learned one called ‘No Getting On’ which we’ll be debuting in New York. There’s another new number in the works which is heavily Factory Records inspired and features Alan, our drummer on his new electronic kit . . . very 80s.
…
DS: As well as this New York show you played SXSW earlier this year and you regularly play all over Scotland and the UK, is there one particular place that you really looking forward to playing?
Tommy: Japan. I’m waiting for the day when the Japanese fans make action figures of Kev (the FOUND pin-up). It can’t be long now. 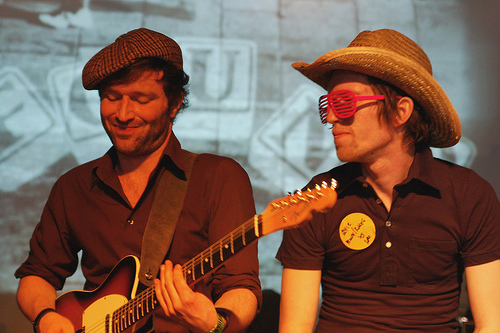 DS: Do you feel more Scottish when you are abroad, or do you adapt well to new places? Anything you’ll miss about Scotland?
Ziggy: When in Brooklyn, I cycle a ‘fixie’ bike, put on my best NY accent and draw some tattoos on my arms with a biro. Nobody can tell the difference.
Tommy: I’ll miss the Scottish weather.
…
DS: What will be your first words on stage in New York City at CMJ?
Ziggy: “Is this mic definately on….it is aye….. oh hi we’re a band called FOUND…..nah not PHONED……FOUND…like lost and found, you know”

FOUND – When You Fall (live at The Mill)

DS: How do people react when they discover you are Scottish?
Tommy & Ziggy: They offer us a whisky.

DS: Are there any Scottish musicians, past or present, that have  influenced you?
Tommy & Ziggy: Ivor Cutler, The Pastels, Trash Can Sinatras, Jimmy Shand, Fence Records, Mother and the Addicts, Uncle John and Whitelock, The Twins, Arab Strap, Rod Stewart, Belle and Sebastian, The Vaselines, Lulu.

…
DS: What should the Scottish national anthem be?
Tommy & Ziggy: ‘I’ll Get Them In’ by the Trash Can Sinatras, without any doubt.

[audio:http://dearscotland.com/audio/Trashcan Sinatras – Ill Get Them In.mp3]
…
DS: What is the best after-show experience you’ve had?
Tommy & Ziggy: Drinking margaritas at sunset on a rooftop on 6th Street, Austin.
…
DS: And finally, many many years from now, when you finish your farewell world tour, is there one place to where you would like to retire?
Tommy: Jedburgh.
Ziggy: Hawick

FOUND will play an official CMJ showcase at The Rose on 345 Grand Street, Brooklyn on October 22, and at the Central Park Bandshell as part of Pumpkin Fest on October 24th. Both shows are free.

Additional shows and appearances may be announced in the next few weeks. Check back here or at the band’s website for more details.

Photo credit: Jane Barlow (Alan was away in Norway snowboarding).