Dont You Forget About Me : June 1965 - The Beatstalkers cause a riot in George Square

In 1965, Scottish music fans were split between the Beatstalkers and Dean Ford and the Gaylords as to who was the biggest band in Scotland. And when The Beatstalkers decided to put on a free show for a few hundred fans in Glasgow’s George Square, it became apparent just how big they had become.

DYFAM : June 1965 – The Beatstalkers cause a riot in George Square

Alan Mair from the Beatstalkers reminisces:

That was the wildest and most bizarre thing ever. My Mum said I should put an advert in the Sunday Mail, but I said it wouldn’t be right, and there’ll be a few hundred people there anyway. So the day came and we were sitting in the manager’s office, a few hundred yards from the square, and one of the roadies phoned: ‘There’s hundreds….there’s thousands of people here!”.

We knew the Tongs, one of the hardest gangs in Glasgow, and we asked them to get a few people there because there were only two policemen. But when we arrived we still had to fight our way to the stage. We got to play one number – but people were rushing the stage, pushing in every direction, and the Tongs were shouting, ‘We can’t hold them back!’ The two police had gone to their TARDIS and phoned for more police, and there was a press helicopter above us, and the mounted police galloped in, and I’m thinking, ‘Fucking hell, this is out of control!’.

Then the police told us we’d need to stop playing, and that’s when everyone went nuts. They must have been thinking, ‘I want a piece of them before they go!’ The stage started coming forward and the police told us to get out over the back and get into the City Chambers. Tudge and Ronnie ended up on the back of police horses – tally ho! We were very bedraggled by the time we made the 80 yards in to the Chambers. It was national news…all the papers covered it, front page and everything.

I got home before my mum finished work, and she said, “How did it go?’ I said, ‘Aye, okay…’ She said, ‘You should have put it in the Sunday Mail – it would probably have gone better.’ I said, ‘Maybe – have you seen the paper?’

From “Big Noise – The Sound of Scotland” by Martin Kielty” 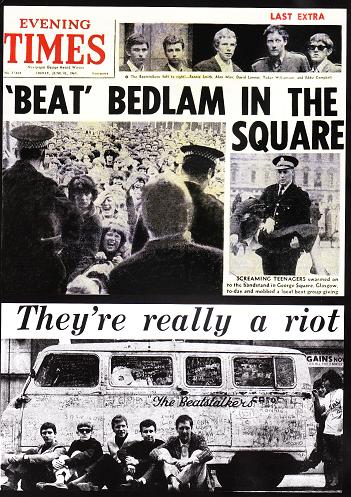 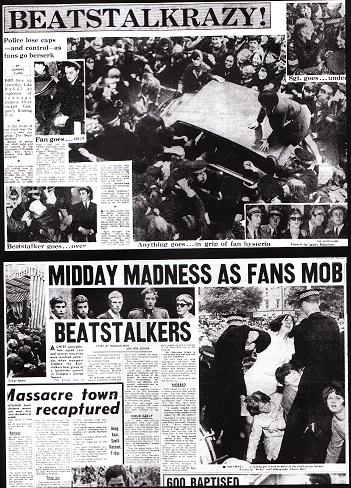