Scotland on Tour with Vic Galloway - Sons & Daughters in Melbourne

Having spent Hogmanay with Vic and Primal Scream in Edinburgh, Sons & Daughters have headed for some summer sunshine in Australia and will be in Adelaide, Sydney, Melbourne and Perth this week. Vic has more on them as well as the only complete listing of every Scottish gig outside the UK.

Take 2 boys, 2 girls some dark country, gothic rockabilly, glam rock and a twist of indie and you start to get the idea.They love The Cramps, Johnny Cash and David Lynch as well and their live performances are even better than their recordings.

With an intensity and pent-up sexual release you don’t often see the likes of this onstage. They should have new material coming out soon, so this could be a good time to hear a mix of oldies and newies. Check them out Down Under this month and be impressed!

Sons & Daughters in Australia (not related) 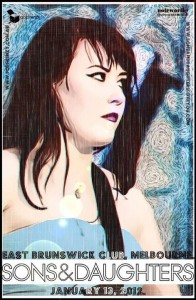 Scotland on Tour this month