This month in Scottish Entertainment / Actor News was a bit quiet, but Helygen still brings us all the latest developments relating to Dougray Scott, James McAvoy, Gerard Butler, David Tennant and more. 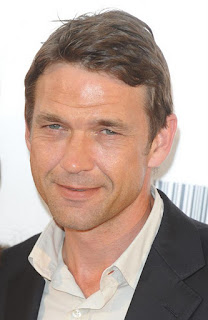 Written and directed by Omid Nooshin, the project is billed as a thriller and details the story of a doctor who finds himself on a runaway commuter train and also stars Kara Tointon.

Budgeted at just north of £1.2 million ($2.5 million), the movie is also bankrolled by Future Film and the BFI Film Fund.

Pathe is handling international sales and inked deal memos with nine territories including Russia, Brazil, Turkey and Portugal during this year’s Festival de Cannes on the back of a dummy trailer for the film.

Pinewood Shepperton is aiming to back four films a year from first-timers, with a combined budget of around $13 million.

Earlier this year, the group pushed cash into the Simon Pegg’s A Fantastic Fear of Everything, co-directed by Crispian Mills and Chris Hopewell. 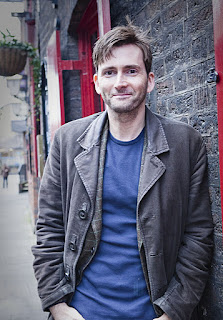 David Tennant is to star as Robert Louis Stevenson in a BBC drama based on the author’s travel writings and personal letters. The two-part Radio 4 drama, called Stevenson In Love, portrays “significant journeys” the writer made, and how his feelings for a woman who later became his wife affected him on his travels.
In the first part, called ‘Travels with a Donkey in the Cevennes’, the drama follows Stevenson in France. Here he kept a journal that was to become his travelogue from which the drama takes its name. In the second part, ‘The Amateur Emigrant’, Stevenson catches a steamer to New York and then undertakes a train journey across America, ending in California.
The drama has been written by Mike Harris. Part one will be broadcast on Radio 4 on October 26, with part two on October 27.
The cast also features Lizzy McInnerny.
Source: The Stage

Doctor Who: The David Tennant Years

Just in time for the holidays, BBC is compiling one massive collection in honor of the Tenth Doctor, David Tennant, with the release of Doctor Who: The Complete David Tennant Years.
David Tennant first appeared as The Doctor in 2005, and went on to star in three seasons and eight specials as the tenth incarnation of the Time Lord. BAFTA-winner Russell T Davies (Torchwood, Queer as Folk) is lead writer and executive producer and BAFTA-winner Julie Gardner (Torchwood, Life on Mars) is executive producer.

Billy Connolly to raise money for Leukaemia and Lymphoma Research 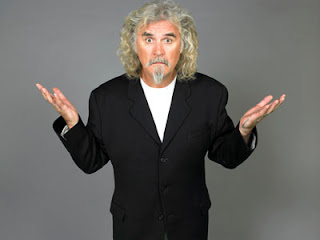 The comedian and actor Billy Connolly will raise money for Leukaemia and Lymphoma Research through an event in London on 6 November.

A Special Audience with Billy Connolly will take place at the Criterion Theatre, where audience members will be able to put questions to the performer. 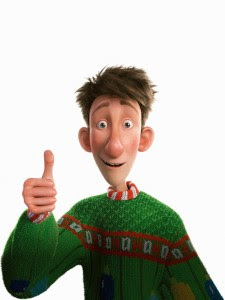 Synopsis: Set on Christmas night, the story of Arthur Christmas at last reveals the incredible, never-before seen answer to every child’s question: ‘So how does Santa deliver all those presents in one night?’ The answer: Santa’s exhilarating, ultra-high-tech operation hidden beneath the North Pole. But at the heart of the film is a story with the ingredients of a Christmas classic – a family in a state of comic dysfunction and an unlikely hero, Arthur, with an urgent mission that must be completed before Christmas morning dawns.

McAvoy leads the cast as Arthur, the good-natured but clumsy younger son of Santa. Arthur LOVES everything to do with Christmas; indeed, he is the only one in his family still captivated by the magic of the holiday. Laurie will play Arthur’s older brother Steve, heir to the reins, a cool, incredibly capable guy who has given the North Pole high-tech efficiency, military-style precision. Broadbent plays Santa, who pictures himself as the guy in charge at the North Pole, but is now more of a figurehead as the operation has outgrown him. Nighy plays Santa’s 136-year-old father, Grandsanta, a cranky old codger who hates the modern world, is always grumbling that Christmas ‘was better when I was Santa’ and has a tense relationship with Steve, who he calls ‘A postman with a spaceship.’ Jensen will play Bryony, a lowly elf from the Giftwrap Battalion, with an eager-to-please attitude and an obsession with wrapping and bows. Imelda Staunton rounds out the cast as Mrs. Santa, dedicated wife and mother to her husband and sons.

The movie will be released to theaters on November 23, 2011.

Digital Spy have some photos of James McAvoy, filming “Trance” on location 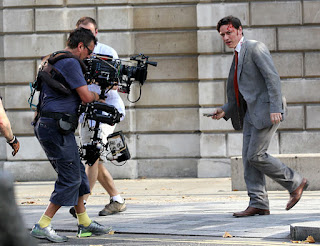 Digital Spy
The Film Stage has more pictures and info. 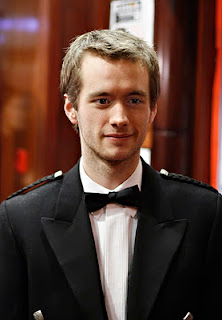 With singles from their debut album Reach Out, Disconnect getting lots of airtime, and their performance on the BBC Introducing stage at T in the Park in the U.K., Wrongnote has certainly been making many connections with listeners. Frontman Callum Smith and guitarist Sean Biggerstaff (Harry Potter) recently discussed the band, the music, and “conjunctivitis” in an exclusive interview with The Ticker. 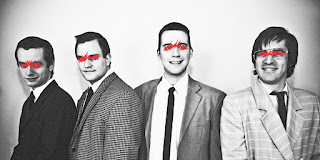 Along with Smith and Biggerstaff, bassist Greig Duncan, and drummer Stewart Robison round out the band’s lineup. Wrongnote formed in 2008.

“The driving force is basically me,” said Biggerstaff, “I’ve pulled the strings all along, without the others’ knowledge, and once I was finally happy with the set up, I condescended to actually join the band.”

But Smith paints a different, albeit probably more accurate, picture. “Sean regularly disappeared and re-emerged in a more aggressive form, like conjunctivitis or kidney stones […]the driving force has been a collective idiocy: The idea that, somehow, music is how we can best define ourselves,” he recalled.

Full story at The Ticker 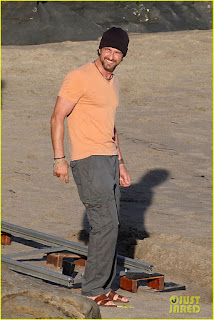 Scottish actor Gerard Butler is in talks to star along with Avatar actor Sam Worthington in the upcoming film Hunter Killer.

The 41-year-old actor has been approached to appear in the film – which is based on a novel, ‘Firing Point’, written by George Wallace and Don Keith, reported Contactmusic.

The movie follows a rogue Russian general who kidnaps his country”s president, who is pursued by an untested submarine captain – the role Butler is in negotiations for – and Worthington is to play the naval commander.

It is not yet known who would play the general or the Russian president. Antoine Fuqua will direct the movie, which is scheduled to begin shooting in January.
Source: MSN News
This story is also reported, with variations, by IGN Movies, Metro and Empire Online 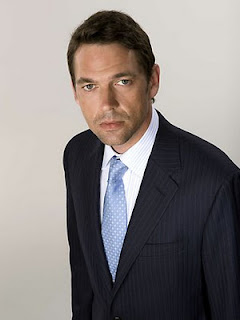 Leonardo DiCaprio is the frontrunner to play Alan Turing in a forthcoming biopic of the British mathematics genius and codebreaker, reports Deadline. On Tuesday, Warner Bros bought a script by first-time screenwriter Graham Moore that centres on the second world war hero.

Turing was largely written out of 2001’s Enigma, perhaps the best-known portrayal of the Bletchley Park codebreakers, even though he was the leading figure at Britain’s wartime decryption centre. Michael Apted’s film presents a character named Jericho, played by Dougray Scott, who clearly resembles the man often credited as the father of computer science and artificial intelligence. However, Jericho is a heterosexual who becomes a love interest for Kate Winslet’s character in the film, while Turing was a homosexual who was prosecuted by British authorities for his sexual activities after the war and forced to undergo “chemical castration” as an alternative to prison.

Moore’s screenplay is titled The Imitation Game and has reportedly interested Oscar-winning director Ron Howard, though no deals have yet been struck. It has the ring of awards season about it: Hollywood has been keen to find a worthwhile successor to Tom Hooper’s The King’s Speech since the British historical drama struck gold at this year’s Oscars, though Turing’s tale has a more downbeat ending.

Turing, whose statue stands at Bletchley Park, was arrested in 1952 after police learned of his sexual relationship with a young Manchester man. He made no denial or defence during his trial and, rather than go to prison, accepted injections of oestrogen intended to neutralise his libido.

Turing’s mental health is said to have taken a further turn for the worse when he was shut out of Britain’s security operations – he had continued to work part-time for GCHQ, the post-war successor to Bletchley Park – due to Britain’s post-war alliance with the US and concerns over cold war spying. He was found dead by his cleaner on 8 June 1954. The coroner’s verdict was suicide, though Turing’s mother believed he had accidentally ingested cyanide after a chemistry experiment. In 2009, Gordon Brown made an official public apology on behalf of the British government for the way Turing was treated after the war. 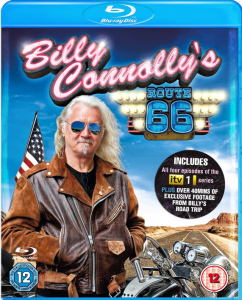 Billy Connolly’s Route 66 drives onto Blu-ray and DVD on the 10th October 2011 from Universal Pictures (UK) Ltd. Also available to buy and download from iTunes.

Route 66 is the embodiment of the American Dream. Millions have travelled its epic trail from the skyscrapers of Chicago and St Louis, through the Wild West badlands of Oklahoma and Texas, the Grand Canyon and deserts of New Mexico and Arizona, to the beaches of the Pacific and the excesses of LA.

Set to a soundtrack of some of the best American music of the 20th century, Billy also brings his banjo along for the ride. With his unrivalled ability to tell a great story, he brings to life both the big and small moments of American history: the world changing events and the comic asides.

“Travelling Route 66 has always been a lifelong ambition – It brings together some of my favourite things -my trike, my banjo and America. The ultimate road trip”

On his way, Billy meets disciples of Route 66, from seasoned “roadies” to first-timers living the dream. And he isn’t just passing through: anything could happen on the way… from swapping his Boom trike for a horse saddle in Texas, to soaring above LA in a helicopter with the city’s traffic patrol.

Includes over 40mins of exclusive, never been seen before, DVD extras – featuring Billy’s hilarious video diary from his road trip.

Billy Connolly’s Route 66 is the definitive DVD and Blu-ray, also available to buy and download from iTunes this Autumn.

All you need to do for your chance of winning a copy of the Blu-ray is email contest@obsessedwithfilm.com with the e-mail header Billy Connolly’s Route 66. Make sure you leave your full name and address and please only enter if you are 12 or over. Winners will be notified in November.

Source (and more information): What Culture! 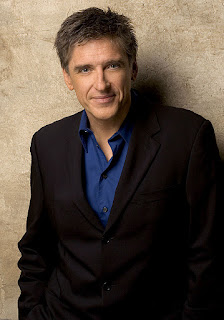