This week in SEAN, an interview with Robert Carlyle about the new season of Stargate Universe, James McAvoy talks about the new X-Men film, and a clip from Ewan McGregor’s new Battle of Britain documentary. And remember, if you want to watch live and on-demand UK TV, try Expat Surfer free for 3 days.

Steve Weintraub from Collider conducted an interview with Robert Carlyle on the Stargate Universe Vancouver set. There are some spoilers in the interview. Stargate Universe returns with new episodes tonight (September 28) on Syfy in the US.

Focus Features acquired Ewan McGregor’s Beginners this Sunday at the Toronto International Film Festival, making it Focus’ first buy at Toronto. The film is likely to open in the late spring or early summer of 2011 and Focus Features will use approximately $2 million for marketing.

Ewan McGregor and his brother Colin visited (via Best of Ewan) RAF Cranwell in April to film part of BBC1 documentary The Real Battle of Britain which aired on Sunday, September 19. Ewan talked about making the documentary with his brother:

“The Battle of Britain was a dramatic turning point in the history of the Second World War and a defining moment in world history. It was a privilege for Colin and I to make this documentary; not only to mark the 70th anniversary itself, but to be able to pay tribute to the courage and sacrifice of those who fought during the battle”.

Ewan’s brother Colin also attended a thanksgiving service at Westminster Abbey for the 70th anniversary of the Battle of Britain. Colin who is in the RAF read a prayer at the ceremony:

“Let us pray for those members of the Royal Air Force, who through their vigilance and determination make it possible for planes to fly and defend these shores.

“For all mechanics and ground crew, for radar operators and engineers, members of the logistics corps, that inspired by the example of their forbears, they might continue to fulfil this vital service with skill and pride.”

A clip from the documentary is below.

The trailer for animated film Gnomeo and Juliet has finally been released, and you can watch it below. You can also watch it in HD over at Apple Trailers. The 3D film stars James McAvoy, Emily Blunt, Michael Caine, Jason Statham, and Patrick Stewart.

The greatest love story ever told, starring…garden gnomes? In “Gnomeo & Juliet,” Shakespeare’s revered tale gets a comical, off-the-wall makeover. Directed by Kelly Asbury (co-director of “Shrek 2”) and showcasing both classic and original songs by Elton John, the film features the voices of James McAvoy and Emily Blunt as Gnomeo and Juliet, who have as many obstacles to overcome as their quasi namesakes when they are caught up in a feud between neighbors. But with plastic pink flamingos and thrilling lawnmower races in the mix, can this young couple find a happy ending?

James McAvoy took some time off from promoting The Conspirator at the Toronto International Film Festival to talk about taking over Patrick Stewart’s role as Charles Xavier with MTV News. X-Men: First Class is currently shooting in England and will open in 2011. 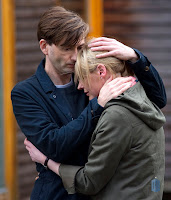 The BBC released a press statement confirming that David Tennant‘s miniseries Single Father will premiere the week of October 9-15 in the UK. An exact date still hasn’t been confirmed. Single Father will also be simulcast on the BBC HD channel. You can go here to read the full press release.