Recently, in between all the football and 12 hour tennis marathons, I managed to fit in another viewing of Alfred Hitchcock’s film adaptation of John Buchan’s novel The 39 Steps. This story has been adapted many times with differing results, but Hitch’s version is far and away the best. Made in 1935 the film has many of the motifs that would become familiar to fans of Hitchcock’s movies.

Robert Donat is a classic leading man, and his portrayal as Richard Hannay, an innocent man under suspicion, can be seen as a forerunner of Cary Grant’s role as Roger Thornhill in North by Northwest. Madeleine Carroll takes her place alongside Ingrid Bergman, Grace Kelly, Eva Marie Saint, Kim Novak, Tippi Hedren and others in the pantheon of Hitchcock’s ‘blondes’ (he believed they represented innocence, apparently, making any deception they are involved in all the more shocking) and there are plenty of typical set pieces, maguffins and mild misogyny along the way.

The chase on the Forth Railway Bridge, the enforced stay in the boarding house and the final act of the memory man (see below) are all stunningly staged scenes that stand alone, with the dialogue and action firing. 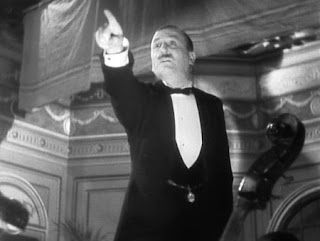 There is a sense of humour that is lighter than in later Hitchcock films, where the humour, if you can find it, is pitch black.

But the most interesting section of the film, and I’ll admit I’m not the first to mention it, is that involving John Laurie’s crofter and his young wife Margaret (played, a little bizarrely, by pre-Dame Peggy Ashcroft). The scene shows a change in pace from the chase in which Hannay finds himself embroiled.

At first Hitchcock shows how remote this croft is, isolated in the bleak Highland landscape. He then moves onto the drama that lies inside. When Hannay first meets the couple he understandably presumes that Margaret is the crofter’s daughter, not his wife. Later conversation between Hannay and the young woman subtly presents the audience with the clash of two Scotlands. Circumstances dictate that Margaret finds herself in what could be described as a typical Kailyardesque situation, married to an older man who treats her as unpaid help. When she waxes lyrical to the stranger about her days in Glasgow and the bright lights of Sauchiehall Street, and gets excited as Hannay talks about his big city life, possibly seeing him as a passport out of her current situation, it becomes obvious that Scotland was changing, and that the hopes and dreams for a young woman went beyond marriage and motherhood. 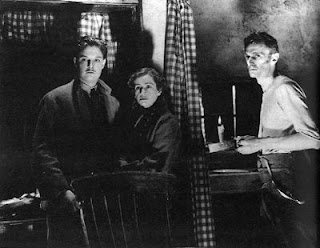 Laurie’s crofter soon realises that there is a connection and possible attraction between the two and sets out to hand Hannay over to the police. He is seen watching the two (voyeurism being yet another favourite Hitchcockian trait) and the hatred and fear of his younger rival is etched on his features.

Here Hitchcock delivers one of his most dramatic, and understated scenes, and it is a testament to his skill that the change of pace it brings doesn’t derail the rest of the film. The film as a whole is a triumph, but next time you watch it think of the crofter’s scene as a drama on its own. If you’re like me you’ll find yourself wondering what happened next to Margaret and her frightening husband. For all of the mystery and suspense in The 39 Steps, they are the characters that stay with me.

Buy The 39 Steps and other Scottish films from the Dear Scotland Shop: