This week in SEAN, Kevin McKidd wins an award for his Grey’s Anatomy work, Gerry Butler arrives in Belgrade to work on Coriolanus, Martin Compston talks about Alice Creed ahead of its UK release this week and David Tenannt hears some good news about his NBC pilot:

Kevin McKidd accepted his award at the 14th Annual Prism Awards last Thursday. He won in the Performance in a Drama Series category for Grey’s Anatomy. You can watch Kevin’s red carpet interview with ET, below:

First photo of Gerard Butler on the set of ‘Coriolanus’

Gerard Butler arrived in Belgrade on Tuesday morning to begin filming Coriolanus. He will reportedly remain in Belgrade until the week is over. His very first on set photo is now online. 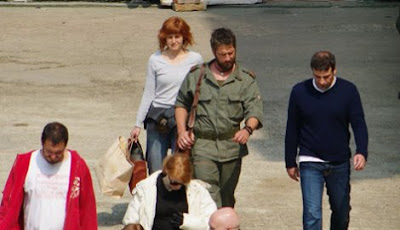 Ewan McGregor to appear at the White House Correspondents’ Dinner

The Disappearance of Alice Creed opens on April 30 in the UK and there are two new interviews with Martin Compston.

Martin Compston and his co-star Gemma Arterton talk about working on the film.

There’s also a profile in The Times that you can read in full here. Part of the interview with Martin is posted below:

At about this time Compston even gave LA a second shot. He moved there, in the winter of 2007, and worked as a volunteer in a free health clinic on Beverly Boulevard. “I told everyone: ‘I’m going out there not to look for acting work, just to see if I can live there’. ” He says that his time there was “mad”, and that working at the clinic was often “horrible” — “There’d be a guy having a heart attack right in front of me, but because he couldn’t fill out his form nobody would touch him!”

Renewed hope for ‘Rex Is Not Your Lawyer’ + new ‘Hamlet’ clip

NBC delayed David Tennant‘s Rex is Not Your Lawyer back in January, but it looks like the show might still have a chance at being in the fall lineup. NBC needs between 5 to 7 new dramas for the upcoming season:

REX IS NOT YOUR LAWYER: This off-cycle pilot staged a comeback after being pronounced dead when the network didn’t pick it up for midseason. The legal drama’s producers did more work on the pilot they had originally rushed, including adding voiceover. The reworked pilot tested well, and the project has received an order for two back-up scripts. [Deadline via ONTD!]

David Tennant‘s Hamlet will air on April 28 on PBS‘ Great Performances. It will then debut on DVD on May 4 in the US. David Tennant on Twitter points us to a preview of Hamlet: