This week in SEAN, James McAvoy is up early to promote his new film ‘The Last Station’, T0ny Curran is photographed on the Dr. Who set, David Tennant is back on US telly and Gerry Butler’s battering charges are dropped:

The Royal Shakespeare Company’s 2008 stage production of Hamlet will air on PBS’ Great Performances series on Wednesday, April 28 2010 at 8pm EST. Hamlet originally aired in the UK on Boxing Day in 2009 with more than 900,000 viewers.

NBC so far has refused to confirm any pilot pickups but the network is expected to make announcements very soon. It seems likely that they will pick up David’s hour-long pilot Rex Is Not Your Lawyer. They reportedly plan to order 10 drama pilots for next season to replace Jay Leno’s 10pm talk show. Stay tuned.

Photos of Tony Curran on the set of ‘Doctor Who’

There are some photos of Tony Curran shooting the upcoming Vincent Van Gogh episode. Tony was cast as Van Gogh last year and the photos are from last week. New Doctor Who episodes premiere on both BBC in the UK and on BBC America in the spring. 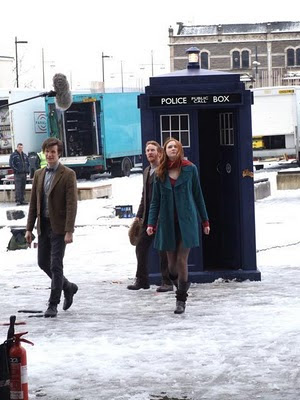 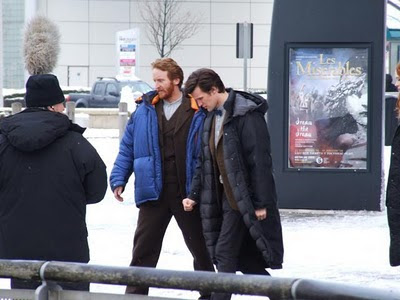 Head on over to Scootyboy’s photobucket for even more photos.

James McAvoy got to the US safely after the weather delayed hundreds of flights in London. He did an interview on KTLA Morning News on Friday. Thanks to McScot82 and toxicosmos82 for sharing. 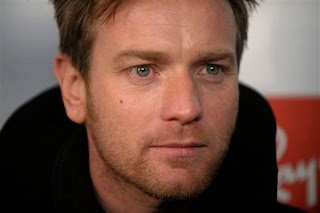 The folks over at The Playlist report that sources say that Ewan McGregor has been cast in Steven Soderbergh’s Knockout, along with Micheal Fassbender, Dennis Quaid, and Michael Douglas. It hasn’t been totally confirmed, but the people at The Playlist usually know their stuff. Soderbergh is scouting locations in New Mexico for the February production start date, and Ireland and Turkey might also be locations for the film. The film might be getting an August 2010 release date. A huge thanks to Magdaléna for pointing this information out to us on our Facebook page. Here’s a synopsis of the project:

Ultimately, “Knockout” is now more of a revenge action-spy thriller. Essentially it’s hell hath no fury like a woman scorned and especially one who kicks serious ass. Double crossed by someone on her own team, Mallory Kane (Carano)— a black ops super soldier — seeks to uncover who has set her up to take the fall for a job that goes bad and involves a murder.

The male actors are all part of Carano’s special forces team. Douglas plays a government figure not unlike Chris Cooper or Brian Cox from the ‘Bourne’ movies. Fassbender and one other actor who has yet to sign-on officially (we’ve been asked not to say who because it’s not 100% confirmed, but the actor is male and a fairly big name; though it’s possible scheduling conflicts may prevent him from participating) play members of her commando spy unit, and one of these two plays the central antagonist that betrays Carano’s character (this is still being kept under wraps for now). McGregor’s role is that of the owner/guy who runs a Blackwater private military company-type group that the female fighting champion is is part of (and apparently many of the males take a beating at the hands of Carano).

…Soderbergh has been circling McGregor for some time now. The “Trainspotting” actor was originally pegged to have a role in the ‘Ocean’s’ films, but his commitments to Lucas’ “Star Wars” prequels unfortunately precluded his participation.

…
The Playlist also announced that The Ghost Writer, starring Ewan McGregor will open in limited release on February 19 in the US and will expand on March 5 and March 15.
…
… 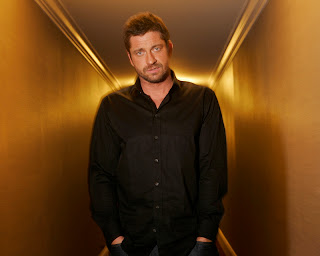 And so it ends:
A judge has dropped a misdemeanor battery charge against Gerard Butler.

Superior Court spokeswoman Mary Hearn says the charge was dismissed at a hearing Tuesday after the actor completed community service.

Butler could have faced up to six months in jail if convicted. His attorney, Blair Berk, declined to comment.

City prosecutors say the Scottish-born star of “300” had a run-in with a photographer on Oct. 7, 2008 after leaving a premiere party for the film “RocknRolla.”

His manager has said Butler was forced to have his driver stop the car after the photographer sped through red lights and almost struck two pedestrians.

While doing a Last Station press interview with Collider James McAvoy shot down rumors that he’ll be playing Bilbo Baggins in The Hobbit and Ian Fleming in an upcoming biopic. Collider will put up the full interview very soon:

You can check out another interview with James and Helen Mirren over at Getty Images.

James was interviewed by Melena Ryzik at The New York Times Arts and Leisure Weekend last night at the Times Center in New York. Here are some photos by Matthew Arnold. 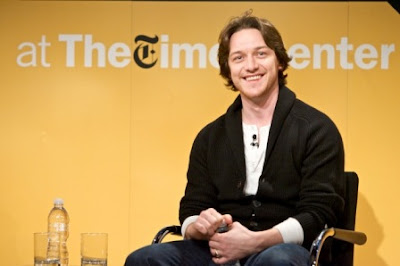