This week in SEAN, Gerry Butler attends a premiere in Glasgow with his mum, David Tennant is Hamlet, John Barrowman goes around the world in 80 days for Children in Need and Kevin McKidd gets more voice work in LA but probably only because Gerry Butler was busy.

I missed Gerry’s birthday. Again. Last year I was in the country and this year I got bogged down by writing assignments. Anyway, I hope he had a wonderful 40th birthday last Friday. He was on Friday Night with Jonathan Ross for his birthday which you can watch below. The episode will air on BBC America on Friday, November 20 in the US.

You can watch video of Gerard Butler’s arrival with his Mum to the Glasgow premiere of Law Abiding Citizen on Sunday night, and an interview on the red carpet.

Gerard is also featured on the cover of Signature LA Direct Magazine. You can read his entire interview over at the source. 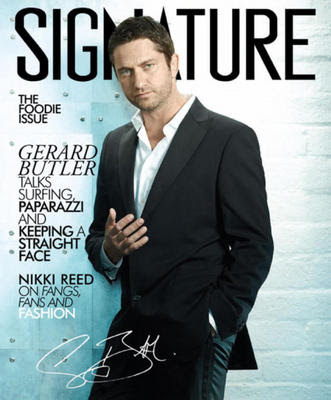 Preview of David Tennant in ‘Hamlet’

You can check out a preview of David Tennant in Hamlet. The Hamlet DVD will be released on December 28, 2009 after it airs on BBC 2 in the UK. It will air in the US sometime in 2010 on the PBS program Great Performances.

httpv://www.youtube.com/watch?v=A6cCaYoDz-Y
…
The official St Trinian’s 2 website is up so check it out here. The film opens on December 8 in the UK.

John Barrowman on ‘Around the World in 80 Days’ & ‘Torchwood’

Around the World in 80 Days…six pairs of celebrities…re-enact the famous voyage of Phileas Fogg. The new six-part series which started on BBC1 on Tuesday 13th October and follows the celebrities who take part in an ambitious a six-leg relay race to circumnavigate the globe. These big-hearted celebs have signed up for this challenging adventure to raise funds for the Children in Need Appeal. [Easier Travel]

John is scheduled to appear on GMTV on November 24 to promote his new DVD An Evening with John Barrowman. The episode is set to air on ITV 1 from 6am to 9:25pm.

There are also some reports that the fourth season of Torchwood might start development as early as January of next year:

“The recession has hit British television, but fingers crossed, it will be a go. We expect things to start to move in January. We’ve got great ideas for the show. I think there’s a further lease on life for many years to come, but certainly for a [fourth season],” [ Russell T.] Davies says. John Barrowman is finishing his run in “La Cage Aux Folles” in London, so there’s plenty of time to trade his feather boa for Captain Jack’s trench coat. [TV Guide Magazine]

Kevin McKidd cast in ‘The Bear and the Bow’?

A recent interview (via Kevin McKidd Online) revealed that Kevin McKidd will be doing voice work for upcoming Pixar film The Bear and the Bow which also stars Scottish actor Billy Connolly as King Fergus. The film is set to be released in December of 2011. Here’s a synopsis:

A rugged and mythic Scotland is the setting for Pixar’s action-adventure The Bear and the Bow. The impetuous, tangle-haired Merida (Reese Witherspoon), though a daughter of royalty, would prefer to make her mark as a great archer. A clash of wills with her mother compels Merida to make a reckless choice, which unleashes unintended peril on her father’s kingdom and her mother’s life. Merida struggles with the unpredictable forces of nature, magic and a dark ancient curse…Turning her into a Bear. [Wiki]

Kevin also discussed his work on Grey’s Anatomy and video game Call of Duty: Modern Warfare 2. He talked about getting letters from Afghan and Iraq war veterans because of his role on Grey‘s:

“…one of the best bits about it all is that we have had a lot of letters…from people who are very grateful that a show of this size and reach is dealing with a subject like this.

“What’s going on over there is very controversial politically, but we’ve been trying to tell the human story out there.

“We’re telling the story of these very brave men and women and what it is to come back, pick up your life and move forward with that experience of a war zone.

“So there’s been a lot of positive feedback from veterans and people working in the support system, as well as parents, loved ones, wives and husbands of returning veterans. They are delighted we are casting light on a subject that not a lot of people are talking about.

“It makes me very proud and pleased – it’s nice to know people are happy with it. It’s great to know that people are not just watching, but taking something from it.” [Daily Record via Kevin McKidd Online]

On Modern Warfare 2, which is now out on XBox 360 and Playstation 3:

He has provided the voice for super soldier Captain “Soap” Mactavish, the head of an anti-terrorist task force.

And the actor, who previously had a small voice role in Grand Theft Auto: Vice City seven years ago, said he loved the chance to just let loose and enjoy himself playing soldiers.

“It was tiring because I would spend the whole day screaming orders at the top of my voice and then to get my voice to the place it needed to be, I found I was throwing myself about the studio like I was jumping on a real motorbike or a Jeep at times.

“But it was great fun and was like all the acting you’d want to do when you were a boy.

“I also got to keep my accent which was refreshing as well, as I spend all my energy at the moment hiding my native voice.”

He joked: “I think that’s one of the reasons I got the part actually – they needed to record in LA, I’ve got a work permit there, I’m Scottish and Gerard Butler wasn’t available.”

Scottish Actor Peter Capaldi will be a guest on Craig’s show on Tuesday, November 24.