This week in SEAN, Saba brings us an interview with Henry Ian Cusick where he discusses playing Charles Darwin, footage of Billy Boyd and his band Beecake on BBC Alba, the status of Ewan McGregor’s film with Roman Polanski and more.

The official Darwin’s Darkest Hour website has been newly updated, and includes an interview with star Henry Ian Cusick. Here are excerpts from the site:

Q: So you knew something about the era before taking this new role. Did you know much about Darwin?

Cusick: No, I didn’t. And he’s been sort of misinterpreted, I think. It’s going to be really interesting for any creationists—if they tune in, which I don’t know if they will—to see what a family man he was, what a religious man he was in the beginning, and how he sat on this information for such a long time. Because his dilemma was: Do I publish or do I not?

Q: In the film, the death of Darwin’s two children, particularly his daughter Annie, is very pivotal. Did having kids yourself help you prepare for those scenes?

Cusick: I think any parent, at some time or other, has thoughts of their child dying. That’s probably one of the worst things that could ever happen to a parent. So yes, it certainly made it easier for me to play, having children of my own.

Q: Were you surprised by anything you learned about Darwin or his theory through the course of doing this project?

Cusick: Yes. You know, for all the creationists out there, Darwin’s just an atheist. But he was actually agnostic. There’s a passage in the film in which he says that he doesn’t know where the initial spark of life came from, you know? He thought that that spark of life came to Earth, and then from that one spark all these other things were created. And I think that’s a very honest and open view. I don’t see how anyone can say he’s anti-Bible, anti-God. He’s saying he just doesn’t know. He doesn’t know where the first spark came from.

The passage in the script, from Darwin’s own writing, goes: “I think there’s beauty—and grandeur—in a view of life having been originally breathed into perhaps a single form, and that from so simple a beginning, endless forms, most beautiful and wonderful, have been and are being evolved.”

Be sure to go here for the entire interview and be sure to check out the new website.

On Monday Billy appeared on Cathy MacDonald’s Cuide ri Cathy. The interview is up at the BBC Alba site and on youtube. You can check it out below:

Billy also had an exclusive interview with the the TheOneRing.net to promote his upcoming East Coast US tour with his band, Beecake. You can read it here.

Beecake also confirmed via Twitter that their Soul Swimming album and tour T-shirt will be available to buy at the venues during their tour. Tour dates and venues are included in TheOneRing.net interview and on the Dear Scotland listings page.

McGregor/Polanski’s The Ghost to be released on schedule after all? 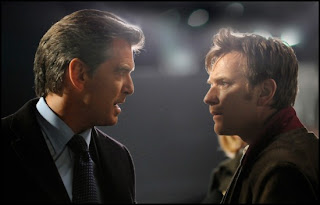 Last week there were reports that The Ghost would be put on hold due to Roman Polanski’s arrest in Switzerland. Polanski’s agent, Jeff Berg said that much of the editing had been finished, but other postproduction work like music scoring and sound mixing had not yet been completed.

But it now looks like the film will be completed for 2010 with or without Polanski. Two French sites have posted news from a conference for exhibitors in Deauville, France.

Here’s a rough English translation from Premiere (via FirstShowing):

Jerome Seydoux, co-chairman of Pathe and Gaumont cinemas confirmed at the exhibitor’s conference in Deauville that The Ghost will reach French screens in March 2010 . If the director is still detained until that time it seems like other members of his team will take care of sound and music for his film.

Another translation from Tout Le Cine:

Scheduled to be on screens in 2010, The Ghost will be released as planned, imprisoned director or not. This is the first site to make the announcement after receiving the information from the lips of the President of Pathe, Jerome Seydoux. Arriving in Deauville to attend the annual conference of exhibitors, the brother of Nicolas said that the timetable would not move, whatever the circumstances.

There are also some photos of Ewan McGregor from The Ghost for you to check out:

In this exclusive clip (via HitFix.com), Dr. Nicholas Rush (Robert Carlyle) finds himself at odds with Msgt. Ronald Greet who is ready to stop him from playing with the ship’s computer — a console that says his adjustments will blow up the vessel.

The two hour series  Stargate Universe premiered on Friday at 9pm Eastern on SyFy in the US. 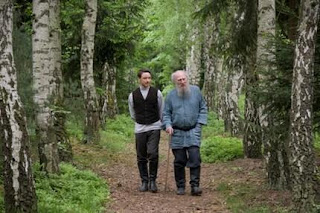 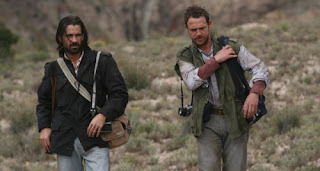 “sony pictures classics really is releasing the last station for Oscars. Not Get Low. That’s 2010.”