Now a highly regarded football analyst, it is easy to forget that Andy Gray was also a formidable striker in his day. In the 2nd part of an exclusive interview with Dear Scotland, Andy talks about Jock Stein, missing out on the Scotland World Cup squads and how he would fare as a player today.

Andy Gray started his career at Dundee United where he scored 46 goals in 62 appearances. In 1975 he signed for Aston Villa and over the course of the next two seasons he scored 54 goals. In 1977 he was named both Player of the Year and Young Player of the Year by the PFA, a historic double not repeated until Cristiano Ronaldo won both awards for the 2006-07 season. 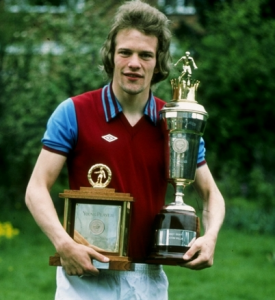 Andy Gray scored goals and won major trophies throughout a career that included spells at Wolves, Everton and Rangers. However, despite his prolific strike record, Andy was never selected to represent Scotland at the World Cup Finals. Now, ahead of Scotland’s crucial World Cup qualifiers against Macedonia and the Netherlands, we present the 2nd part of the interview conducted when Andy was recently in New York. The first part can be found here.

DS. What are your memories of the 1978 World Cup?
…
Andy Gray: Well I played 40 games that year and scored something like 25 goals for Villa and I remember Ally MacLeod came to see me in the last game of the season against West Brom at the Hawthorns.  The only reason I know this is because Big Ron Atkinson was the Manager of West Brom at the time and he’s told me that MacLeod came into his office before the game, so Ron asked him who he was down for. Ally said “I’ve come to check on Willie Johnston, see if he’s ok, see if he’s fit”. And Ron says “Yeah, he’s great, anything else?” Ally says “Aye, I’ve come to have a quick look at Andy”. So Big Ron tells him “I don’t think you’ll have any problems with Andy, I think he’ll be alright.”
…
And we went out that day, I didn’t score, but I terrorised Wile and Robertson, the two West Brom centre-halfs, and we won 3-0.
…
So Ron tells the story that Ally MacLeod came back in after the match and Ron tells him “You’ve got a decision to make about Andy after that haven’t you?”
..
And I can remember being in my mate’s wine bar on the Monday morning and he’s got the champagne out because the squad is being announced. But I told him to put it away. I just had a funny feeling that something was not right. So I made the call to find out the squad, and it wasn’t to be. But they had some great players in that team.
..

DS. How about 1982?
..
Andy Gray: I played in most of the qualifying matches but didn’t make the squad. I’m trying to think who went – Joe Jordan, he was a good player, Kenny, Steve Archibald, Alan Brazil I think.
…. 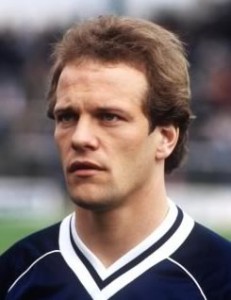 DS. How about the 86 World Cup?
..
Andy Gray: I could maybe have gone then too. Me and Sharpy (Graeme Sharp) were at Everton in ’85 and we won the league and Big Jock (Stein) came to watch us the night we played Bayern Munich at Goodison (in the Cup Winners Cup Semi – see video below). We had a great game and Jock came straight up and spoke to us after and said “Fuck me, I’ve just seen 2 players roll back the years, an unbelievable performance, you’ll both be in the team.” But of course Jock died at the qualifying game in Cardiff. I was actually sat on the bench that game when it happened.
..
..
DS. What was Jock Stein like as Scotland manager?
..
Andy Gray: He was a legend. Larger than life. He still loved the game. I remember him and Alan Brazil both loved a bet on the horses too. He would say things to Brazil like “What price did you get on that horse in the Derby? Brazil would be like “20 to 1”. Jock’s like “Right I’ll have half of that, give me 10 to 1”. Brazil says “No! Why should I?” and Jock goes “Right well you’re no playing Saturday then!”
..

DS. So how do you think you would have fared in today’s game?
..
Andy Gray: Well people have said that I couldn’t play now but I think I was intelligent enough as a player to know what I could and couldn’t get away with. If I was a centre forward now, playing for someone like Arsenal, I reckon I might have 20 or 30 goals. I could always find a way to score goals, but you never really know.

Andy Gray was talking to The Dear.