When I first heard about Jesus H. Foxx, they were the haircut band support act of choice in Edinburgh, and pretty much the only purveyors of spiky indie punk pop in the city.  That particular niche seems to be quite well inhabited these days, even as the Foxx themselves are leaving it behind.

This EP is very short, very very good, and a hell of a lot more than the slightly one-dimensional band I had rather hastily pigeonholed Jesus H. Foxx as being.  The jerkiness remains in their staccatto percussion and tendency to shift rhythms at surprising times, but these songs are a lot more enigmatic than anything they’ve done before.  There is a brooding atmosphere of experimentalism underlying most of it, rendered almost animalistic by the constant thud of the drums.

Occasionally this atmosphere is burst with a flood of unexpected vocal harmonies, or sometimes a caramel guitar riff*.  This breaking back and forth from the easy to the difficult, and the unsettling to the sugary is what makes this such a good EP.

Another thing is the perfect sequencing.  It kicks of with Oh Messy Life, at under a minute, before smacking us round the chops with I’m Half the Man You Were, the obvious pop song, if you can say that there is one, on this record.  To end, we’re given the crunching Xa Xa Xa, followed by the mellower leave-taking of Matter, which deposits you gently back where you were when you started.  This is, make no mistake about it, a really really nice bit of work, and a very promising new direction indeed.

*Yes, I know I know, what the fuck does that mean.  It’s related to the perfection of the surface of caramel – shiny and clean, but with all that sweetness underneath.  I’d have changed it if I could think of a better word, but I can’t.

From the Song, by Toad Archives 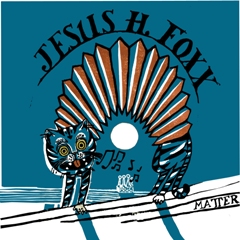 The new Jesus H. Foxx EP is being given a full release on Song, by Toad Records in about a month’s time on September 12th at the Bowery in Edinburgh.  By full release, I mean that we will be making a run of five hundred copies, with hand-painted artwork and I will be doing my best to publicise it around the various magazines and radio stations and blogs out there.  It also implies that they are Song, by Toad Records’ latest signing, I suppose, in the sense that anyone is signed to Song, by Toad Records, which is something I am really pleased about because the stuff I’ve heard from them in the last year or so has been truly excellent.

I’ve not emailed bloggers yet, but we’re getting a little traction with radio it seems, with I’m Half the Man You Were appearing on both Gideon Coe’s 6Music show (my favourite show on the station, which makes it even nicer) and Jim Gellatly’s New Music show on Radio Magnetic.  And apparently I got hammered on the Toad night last Saturday and gave BBC Radio Scotland’s Mr. Vic Galloway a big sloppy kiss, so if that doesn’t get them some airtime on his show I don’t know what will.

That picture above is how the artwork is shaping up so far.  It will be printed on natural card, so there will be a texture to the flat areas of colour which should look really nice.  So, in general, I am really excited about this.  Publicising EPs is harder than albums in many ways, because a lot of magazines don’t cover them, but I am going to try to get through to as many online and community radio stations as possible and see if we can’t make up for it that way.

Buy from Song by Toad Records.

Video below from our friends at Off The Beaten Track