There is a framed photograph on my desk of me in Austin 16 years ago, surrounded by my best friends from high school and university. I’ve just lost a game of soccer, I’m hot, I’m jet-lagged, and we are all exhausted. But I’m so very happy.

When I first lived in Austin, in 1995, I felt that the city would be an almost perfect for me to live. I just wished that all my old friends from the UK could be there with me. And then for one week in October 2000, that wish came true. 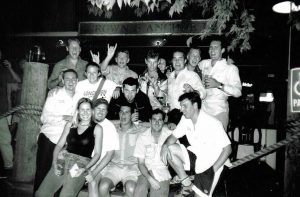 I was living in Edinburgh at the time, bouncing around between various temp jobs, and volunteering as a community mediator. My last job had been at The Scotsman newspaper, editing content for their first website, but I was about to start working for the Scottish Parliament.

I was also newly married, but it bothered me that my secretive wedding hadn’t allowed me to have any sort of stag night. So I set about fixing that on a grand scale. A night or even a weekend wouldn’t suffice. Instead I arranged a weeklong, international bachelor party and soccer tour, for 15 friends, in Austin, Texas.

We couldn’t do it now. A week away with the lads? No chance. But back then we were all in our early 20s, unmarried (except me), with few responsibilities, and, here’s the real reason we couldn’t do it now, we had the desire and the stamina to go out for 7 nights in a row.

It was one of the most memorable weeks of my life.

Having said that, my memory of it is admittedly blurry because a) we went out for 7 nights in a row, and b) we all wore the exact same shirts every day. 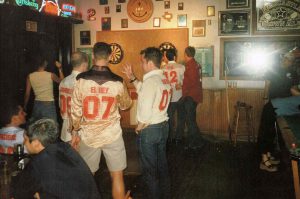 Wearing the same shirts every day was not a requirement, they were just awesome shirts. A few weeks before the trip, Nelly and I had gone into Flip in Edinburgh one day and bought 16 second-hand, western style shirts, with the pearl snap buttons. All of them were different colors and styles, although some were definitely nicer than others.

Then I had our nicknames and squad numbers imprinted on the back in big red letters, and a tour logo stitched on the front, (“THE GAFFER ALL STARS, TEXAS 2000). They did look good, and with a couple of exceptions, they fitted everyone pretty well.

Unfortunately Stef was a late call off, but there were 13 of us that made our way from the UK to Austin one day in October 2000. A few of the lads had opted to spend a couple of days in New York first, but most of us were on the same plane from London. 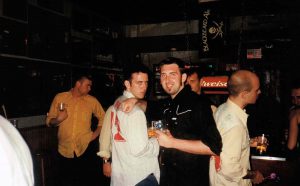 We were met at Austin airport by my friend Marc and his mate Sam, and I ceremonially handed out the shirts as we waited for the 5 lads that had been in NYC to show up. Eventually the New York flight arrived, but only 4 lads shuffled through the arrival gate. Jambo had been left behind.

The adventures of those 5 bozos in New York could probably fill a book of its own, but the story goes that when they first arrived in Manhattan, they wanted to go to their hotel and drink a cocktail. It wasn’t a Manhattan cocktail, which would have made sense, but instead it was something called a B52. I don’t know why. I also don’t know why they put Jambo in charge of carrying the duty free Kahlua, Baileys and Cointreau, but they did. 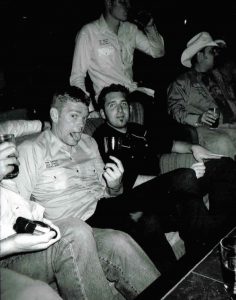 When the 5 of them finally arrived in their hotel room, Jambo realized that he had left the bag of booze in the taxi. The lads were furious. A few hours later, Jambo realized that he had also left his passport and his plane tickets in the same bag. Fast forward three days later, Jambo tried to talk his way onto the flight to Austin without any identification. When that failed, the other 4 hesitated only for a moment, before leaving Jambo to figure it out for himself in New York.

In Austin, now 2 men down, but bedecked in our multi-colored cowboy shirts, we hit the town for a few beers that turned into a few more. Then on the Sunday morning, I’d arranged for us all to go tubing in New Braunfels, about an hour outside Austin.

The concept of tubing is not something any of the lads were familiar with. I’d experienced it back in 1995 as a student, and it had blown my mind. There is no such thing as “tubing” in Scotland. So I couldn’t think of a better first activity for the week.

I still remember the moment when a truck load of hung-over, sweaty, jet-lagged, pasty-faced, British blokes, reluctantly stumbled out of our rental van into the bright Texan sunshine by the Guadeloupe river that Sunday morning. Most of them still had no idea what they were about to do. 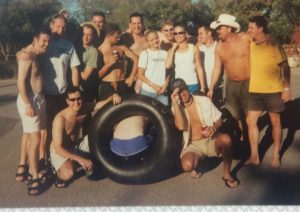 It was Londoner Doyley who finally managed to get his head around the tubing notion as it was being explained to him for the seventh time. “Hang on a minute” he said, “We sit in these rubber rings, we drink beer, and float down a river all day? he asked indignantly. “Yeah Doyley”, I replied. “That’s it?” he said. “Yeah, Doyley”, I repeated. “That’s brilliant!” said Doyley as the wheels in his head finally clicked into gear.

And it was, we floated all day in the sunshine, drank a lot of Mexican beer, and then we were driven back into Austin to play the first of three soccer matches I had arranged. We arrived at the UT soccer fields still in our swimming clothes, and not exactly in peak condition.

Ed had made us soccer shirts, but he only brought half of them to the game. Maybe Jambo had the rest. We lost 2-0 to the UT Law School Men’s team that evening, playing in a mishmash of greenish shirts, but it didn’t matter. We’d made it to Austin, and everyone was loving it. That’s when the photograph I mentioned was taken.

The next day we hung out at the pool at Marc’s apartment complex before we got word that Jambo had sorted himself out, and was arriving on a flight later that night. None of us really wanted to stay sober so that we could go and pick him up, which prompted the idea to chip in and get him a limo. So while we all went out on 6th Street to watch Monday Night Football, Jambo was being greeted at Austin airport, not by his friends as he expected, but by a driver called Jose in a stretched white limousine. 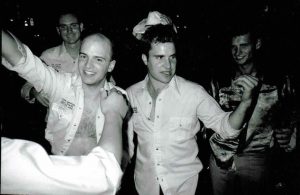 When the limo pulled up on 6th Street, we all piled out of our bar onto the street, pulled him out of the car, ripped off his t-shirt, put on his tour shirt, and carried him back into the bar on our shoulders. It was a great moment and probably made up for Jambo’s disappointment at missing the first two days. It wasn’t until the next morning however, that Jambo realized that he had, once again, left his bags behind in that bar.

We did get his stuff back eventually, and our soccer shirts, in time for the next game. We played two more soccer games, one against a local Austin men’s team and another against an all girls team. We drew against the men and we narrowly won against the women. It was the first time that most of the team had ever played against a women’s team. And they were very good.

I remember that I had emailed all of the captains of the top women’s teams in Austin while planning the trip. I told them that we were a visiting team from Scotland and I asked them if they would want to play a friendly match against us. Most of the captains ignored the email. A few wrote back saying that it would be completely inappropriate, or even insulting. But one wrote back and said they’d love to do it. So we did.

We won 3-0 but it was a tough game and everyone enjoyed it. Then we all went out for dinner and drinks together afterwards and had a great time. I think that was the night I did karaoke for the first time at Club De Ville. 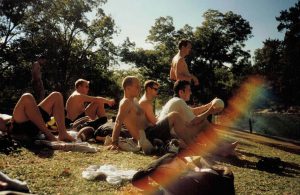 The rest of the week was spent basically doing a tour of all of my favorite places: the Crown and Anchor, Lovejoys, Casino El Camino, Barton Springs, and Marc’s new favorite place, a bar called Club de Ville.

That’s when the days all start to merge together. It was a similar routine: hung-over mornings at fast food restaurants, lazy afternoons swimming outside, followed by messy evenings in bars and clubs. Every night – same shirts, new adventures.

We soon discovered those 100% polyester western shirts were not made for successive nights of wear and tear by sweaty, boozy Brits. Some of the shirts didn’t make it to the end.

By the 7th day, some of the lads were struggling too. One early morning trip to Taco Bell resulted in a major problem for one of the boys. Apparently after a week of Whataburgers and margaritas, it can be difficult for an Englishman to tell the difference between solids and gasses, in relation to colon content. And for one Pump member, who will remain nameless, an early morning trip to Taco Bell did not end well.

“I think I’ve just shat myself”, he divulged to everyone at the table, before he waddled off to the bathroom, only to return 2 minutes later and announce, “I can now confirm that I have indeed shat myself”.

We certainly made our mark on Austin that week. And I don’t just mean the brown stain on the back of Beno’s khaki shorts. We came. We wore smelly cowboy shirts for a week. We played soccer. We went out every night. And we conquered. 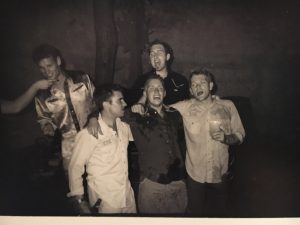 Eventually it was time for us to leave. Jambo even got himself a new passport and made it onto the plane home in time. It was a very long and quiet journey for us back to Edinburgh though as the lack of sleep finally caught up with us.

I got home sometime on the Sunday afternoon, completely spent, but on a different level of happiness. The next day I started work at the Scottish Parliament. 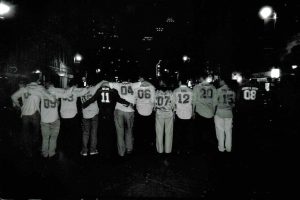