Some people have said to me that they just don’t have time to read books these days. Personally, I would say that their priorities are a tad askew, but I do understand that there are many things vying for everyone’s time, and the thought of tackling a 600 page novel can seem like too much of a commitment. This month’s selection is perfect for such folk as it’s only 114 pages long. But that’s not why I’ve chosen it. It is included because there has rarely been a better snapshot of childhood friendship, and because if you have never read Des Dillon then you really should remedy that. 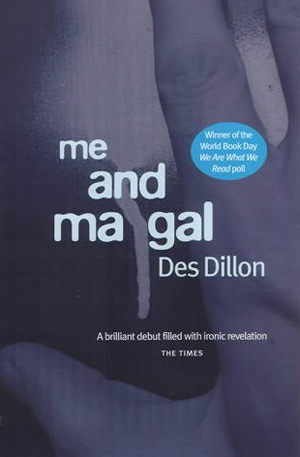 lon could be described as one of Scotland’s best kept secrets, a prolific writer of prose and drama who has never really had the recognition he deserves. Perhaps this is because he commits that cardinal sin of being genuinely funny, something which many see, wrongly, as less than serious. His debut novel, ‘Me and Ma Gal’, showcases this aspect of his writing brilliantly. It’s a book which moves at a breathless speed, but what is Dillon’s greatest strength is his mastery of language. If you ever thought that writing in Central Belt Scots is somehow less than artistic, then you must read this book.

‘Me and Ma Gal’ is the tale of Derek and Gal, best friends for ever, which is the way of it in those days where summer holidays lasted forever and the future is something which happens to other people. While the tales of walking down pipelines, staying clear of the bigger lads and their strange obsession with girls, learning to run sideways down hills, playing places which their parents specifically disapprove, and the moral dilemma which was collecting eggs, will spark memories in many readers, it is the command of the language of the playground which makes the stories ring true.

I hadn’t thought about the word ‘grogger’ since I was Derek and Gal’s age, and that is only one small example of how Dillon captures the world through a young boy’s eyes. He also details the obsession about the correct way to write your name in a ‘mention’, and the odd illogical logic of parents trying to keep their children safe from harm. The other book it reminds me of which has appeared in Indelible Ink is James Kelman’s ‘Kieron Smith, boy’, but there is more energy in ‘Me and Ma Gal’, a youthful exuberance which comes almost entirely from the language. The novel finishes “All I could see was her bum”, which sums up its childish glee.

Here’s a clip of Des reading the opening of the novel, followed by the great Gallagher and Lyle with Breakaway. Ah, the ‘70s:

Dillon went on to write other must read novels, ‘Six Black Candles’, ‘The Glasgow Dragon’ and ‘My Epileptic Lurcher’ among them, but he is probably best known now as the writer of the popular play ‘Singin I’m No a Billy, He’s a Tim’, which continues to be performed regularly, but I would suggest that he never bettered ‘Me and Ma Gal’. It’s a childhood tale as written by Joyce, or imagine Mark Twain had come from Coatbridge instead of Missouri and you have an idea as to just how good this writing is.

Dillon has been an influence on writers such as Alan Bissett, who called ‘Me and Ma Gal’, “one of the most frenetic and kinetic, living and breathing of all Scottish novels”, and Alan Wilson, amongst others, and he is one of those writers who once read is never forgotten. In 2003 ‘Me and Ma Gal’ was voted winner of the World Book day ‘We Are What We Read’ poll, a prize awarded to the book which readers thought best represented present day Scotland. This may surprise those of you who haven’t yet read him, but once you do you’ll understand why this got the popular vote. Dillon manages to make you laugh while remembering things past, and takes you back to a time when life seemed simpler, but actually just had a different set of rules.

All of these columns can now be found in one place over at Indelible Ink.

Further thoughts on Scottish books, film, music, comedy, theatre and the like can be found at scotswhayhae which now has a Facebook home.

Next Month’s Novel: Muriel Spark is still best know as the writer of ‘The Prime of Miss Jean Brodie’, and even then more people have seen the film rather than read the book. What you may not be aware of is that Spark was one of the most deliciously dark, and often macabre, writers you will ever read.

‘The Driver’s Seat’ is perhaps the best example of this. It’s less a whodunit than a ‘whydunnit’, as we learn early on that the central character of Lise will be murdered, and the novel is a journey towards that point as her life unravels. It is one of the most astonishing examinations of human frailty you will ever read.