You Have Been Watching...The Wicker Man

In the winter of 1977 the film magazine Cinefantastique dedicated an entire issue to a largely forgotten 1973 movie The Wicker Man, calling it ‘the Citizen Kane of horror movies’. With hindsight, this can be seen as the moment that the fortunes of The Wicker Man began to change and a film that was poorly received by many critics when it was released became, by the turn of the century, considered by many to be one of the best British films ever made. Against all the odds The Wicker Man endured.

The reason for its growing reputation can be found in that Cinefantastique quote. Audiences went thinking they were going to see a horror movie, but it is so much more than that. It is too simple to see this as a film which pits good against evil. It is about the nature of faith and religion. It places one belief system against another, and depicts the terror that such a clash can bring.

The tension between the locals’ paganism and the visiting Sergeant Howie’s Christianity is at the heart of the movie and is exemplified when the islanders sing the traditional English medieval folk song ‘Summer Is Icumen In’ while Howie tries to drown them out with ‘Psalm 23’. In fact music and ritual are central to the film, and just as it is said that the devil has all the good tunes, so the pagans seem to be having all the fun on their home of Summerisle. Original songs such as the lovely ‘Willow’s Song’ sit alongside well known folk tunes and traditional adaptations, and there are May Day festivities, maypole rituals and fertility dances throughout the film. The music and dance of the island is in stark contrast to Howie’s Calvinistic restraint.

The Wicker Man is classic ‘cult’ material, particularly as it brought together people who were on the fringe of popular culture. Ingrid Pitt was best known for Hammer Horror bodice rippers. Britt Eckland was partner to chanter and tartan clad footie fan Rod Stewart between her marriages to Peter Sellers and the great Slim Jim Phantom. Lyndsay Kemp, who plays the landlord of The Green Man pub in the film, is best known for teaching mime to a young David Bowie. Barbara Rafferty and Tony Roper went on to gain TV infamy as Ella and Jamesie Cotter on BBC Scotland’s Rab C. Nesbitt and Diane Cilento was briefly Mrs Sean Connery before marrying Anthony Shaffer, the man who wrote the screenplay for The Wicker Man. The stories that were played out behind the scenes were more complex than that of the film itself. Here is the trailer:

The film’s sheer oddness could have been unbearably camp if it was not for how serious the lead actors take the film. The Wicker Man is carried by Christopher Lee as Lord Summerisle and the late Edward Woodward as the devout Sergeant Howie. Woodward in particular was never better. They are the representatives of the opposing belief systems. It is interesting that neither men are completely likable, or indeed admirable. Where they are matched is in their certainty that their respective Gods will prove victorious over the other. Theirs is a contest of faith.

Christopher Lee was a real mover in getting the movie made, and, although he thinks that the final cut was a shadow of the film that could have been, he still views Lord Summerisle as his greatest ever performance. Here is the man himself talking about the movie and its critical reception:

The Wicker Man still divides opinions today, but as The New York Times recently said in a review of Christopher Nolan’s Inception ‘any film worth arguing about is worth seeing’. Many view it as the worst pseudo pagan nonsense, many as a deeply unpleasant film, many just think it daft. I can appreciate all of these points of view, and although I’m a fan I admit it is more difficult to pin down why it has become such a widely loved film. My theory is that it taps into a desire for times past, a folk idyll that never really existed.

Anthony Shaffer’s script uses a whole range of pagan ritual and rites including Celtic, Middle English, Eastern European, ancient Greek, Roman and Egyptian as well as those of the supernatural. This pick and mix approach to paganism and mysticism was one that had taken hold in the Western world in the late 1960s and saw a renaissance in the 1990s and again in the present day. The success of festivals, such as The Wickerman Festival which is held in Dumfries and Galloway every year, and the vogue for all things folk in contemporary music (many purveyors of which cite The Wicker Man soundtrack as being a strong influence) give yet more clues as to why the film continues to fascinate and find new followers. Summerisle is not simply an island out of time, but very much of the time. This is a contemporary commentary as well as being fantasy.

The strength of the final acts of the film should never be overlooked when considering its appeal. Some times a good shock is all the audience demands. Occurring in broad daylight (much maligned director Robin Hardy’s masterstroke) what unfolds is genuinely shocking, and a community who we have previously viewed as mischievous, playful and even childish, but rarely truly threatening, turn out to be all too ready to destroy. Perhaps that is what appeals so much about the film? The audience is seduced into believing that these people are ultimately harmless, and that the received law of the (main)land, whether Christian or otherwise, will win out in the end. It is what they had come to expect in their movies. It is these final scenes that have given the film its tag of ‘horror movie’, and understandably so. Few other films leave such an impression.
Swiftly passing over Neil LaBute’s 2006 remake/remodel which can only be of interest to Nicholas Cage and bad movie fans, there has yet to be a sequel to The Wicker Man. Anthony Shaffer did write a treatment for one, the transcript of which can be found in the appendices of Allan Brown’s excellent book Inside The Wicker Man (see Wicker Man Revisited…) but this never came to pass. 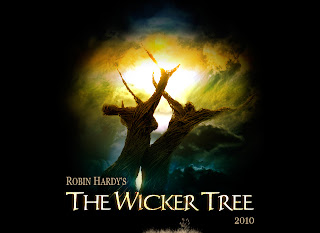 There is, however, a film called The Wicker Tree currently in post production and which sees the story of The Wicker Man come full circle. Although it claims not to be a sequel, it is based on the aforementioned Robin Hardy’s novel Cowboys for Christ and he also directs it. It is also due to star Christopher Lee, although I’ll believe it when I see it. In fact I won’t be holding my breath for the film’s première. It is scheduled to be released this year but as yet has no trailer or accompanying website. So far this poster (above) is the only concrete evidence of its existence. And it should remain that way. The original Wicker Man was a film that worked despite itself. It was a glorious accident. To try and replicate its success would be like trying to bottle lightning.

Willow’s Song (How Do) – Sneaker Pimps