This week in Scottish Entertainment / Actor News, well, it looks like like most of our favourite actors have gone on holiday. Still, there is news on James McAvoy playing a young Patrick Stewart in the new X-Men film, a John Barrowman interview and more photos of Ewan in Beginners. 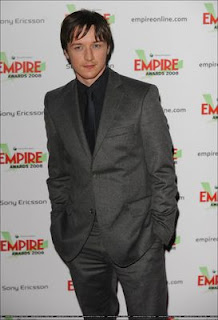 Producer Bryan Singer talked to Harry Knowles over at Ain’t It Cool News and gave a few updates on James McAvoy‘s role in X-Men: First Class. He also confirmed a few things about production, namely that the first look at costumes and production design will be unveiled in “about a month” and he also re-confirmed the August 31 shooting start date in the UK.

…the film takes place in the 1960’s. John F Kennedy is the President of the
United States. Martin Luther King and Malcolm X are on TV doing marches. There
is a spirit of a hopeful future that was prevalent in that time. We will see how
Xavier and Erik Lehnsherr met – and how they dreamt of a future with Mutant
& Human kind. They’re going to be in their late twenties. Xavier –
as played by James McAvoy will not be in his wheelchair to begin the film – but
we will see how he wound up in a wheelchair. I asked if McAvoy would have a nice
shiny chrome dome – and folks. We’re going to see Professor X when he still had
hair. We’ll see McAvoy and Fassbender’s Magneto formulate what it is they are
attempting by creating the X-MEN.
…
Now Bryan wanted us to know
this is not the conventional FIRST CLASS comic – but rather a new beginning for
X-MEN. Set in the 60s – Vaughn is technologically inspired by JAMES BOND’s tech
of the time. The costumes will be far more comic bookish than we’ve seen
before…
…
…Looks like filming will begin with Xavier at Oxford
University in the 60s. And Bryan is excited that the film is going to have a
much more international feel than the prior X-MEN movies. [Harry Knowles]

The first photo from Beginners was unveiled last week, and now two more photos have surfaced. The film’s world premiere will be at the Toronto International Film Festival in September. An official description of Beginners is below:

Five years after Thumbsucker, director Mike Mills returns to the Festival with
another winning indie dramedy that balances humour, sorrow and romance with
aplomb.
Beginners deftly juggles two chronologies to tell the heartwarming
story of two major points in the life of Oliver (Ewan McGregor), a talented
illustrator.

One timeline follows the slow-burning deterioration of
Oliver’s father (Christopher Plummer), who is dying of cancer. But his impending
death is not the only news that has caught Oliver off guard; his divorced
father, at the age of seventy-five, has also come out of the closet. Just like
that, he gets a new wardrobe, a new boyfriend and an entirely new outlook on
life.

Following his father’s death, a bereaved Oliver becomes somewhat
of a shut-in. As Beginners takes us through his personal journey, the film
flashes forward, intercutting a budding relationship between Oliver and a young
French actress (Inglourious Basterd’s Mélanie Laurent) whom he meets at a
costume party that he attends under duress. The twin narratives gradually reveal
subtle associations about how Oliver reacts to both these unpredictable
relationships, and how his father and girlfriend motivate him to surpass his
self-prescribed limitations.

McGregor and Laurent have natural onscreen
chemistry, and Plummer is outstanding in his rich portrayal of a dying man who
is finally able to live honestly, breaking out of his shell so near the end of
his life. The ensemble cast lends the film a warm, understated aura that never
feels the least bit contrived.

Mills is at the top of his game in
crafting dynamic mood pieces that steer clear of the usual trappings found in
American independent cinema. The outcome is a thoroughly enjoyable character
study about people opening up and discovering themselves despite age,
preconceptions and illness. [Jane Schoettle]

John recently did an interview about the 2010 season of Tonight’s the Night.