Hey Enemy are clearly on the path to success. They are my wife’s favourite Scottish band, they’ve been kidnapped my Detour Scotland and their arses have been photographed with Stuart Braithwaite. Next month they hit the road in Europe with Helsinki Seven and they recently spoke to Dear Scotland about the tour and more.

European tour dates and venue info can be found at the end of the article.

Dear Scotland: Where are you now and what did you do last night?
Chet – Right now we’re sitting in Bar Bloc in Glasgow about to play a show with Vakunoht and Other People… Truthfully, last night I got drunk with Kurt from Converge and Pete and Rich from  Dead or American in Nice n Sleazy’s in Glasgow and woke up this morning to find a message scrawled across my bum-cheeks in permanent marker and a photo on the internet of Kurt’s grinning face next to my naked butt whilst a horrified Stuart from Mogwai looks on.
Jesus – Truthfully, sweet F. A. I get the feeling I should have been where Chet was…
Caspin – Watched Top Gear and ate chicken.

DS: Paul McCartney said he got into music to avoid a job – and get lots of girls. What made you get into music?
Chet – To have girls avoid me and be forced into getting lots of jobs to fund the band activities.
Caspin – If I may be spiritual for a moment… It was a kind of calling… Like when yer maw calls you down for dinner, It was meant to be.
Jesus – I still haven’t worked it out. It feels more like a necessity than a choice though (in a good way, of course…).

Kidnap 5 – Hey Enemy and their audience. from Detour Scotland on Vimeo.

DS: What is your favourite song of yours to play right now?
Jesus – “Johnny Fucko”. I rewrote the bassline when we recorded it, and its a lot of fun to play. For the record, my least favourite songs to play are the ones where I have to set up a keyboard loop.
Caspin – “Happy Sanchez” simply because we have played it tons of times and it is now a mindless journey of moving limbs and broken hearts.
Chet – Maybe “Snowy…” because its quick, easy and painless. I like “Tyranny of Swine” but we usually bottle out of playing it because of the vocoder part.

DS: On this tour you’ll be in (Europe and UK), is there one place on the tour schedule that you are most looking forward to playing?
Chet – Caspin just pointed out that we’ll be passing over that huge particle accelerator when we go to Geneva so that’ll be pretty awesome. The chance to be the first people at the event horizon of the black hole that destroys earth is worthy of anticipation.

…
DS: Do you feel more Scottish when you are abroad, or do you adapt well to new places? Anything you’ll miss about Scotland?
Jesus – Strangely, yes. When I’m at home I’m well aware of the many, shall we say, rubbish things about Scotland. When I’m abroad and someone points them out to me I feel duty bound to defend my homeland.
Caspin – I’ve not been abroad for 11 years and I’ve changed a bit since then so I don’t really know how I’ll adapt. I’ll miss my kids and that lady that lives in my house and feeds me and makes me feel happy.
Chet – I think I definitely play up the accent a bit when I’m away. I’ll miss Irn Bru for hangovers. Obviously I’ll miss friends, family and lovers. But maybe I can get new friends, family and lovers abroad so it might work out ok. (I just signed my own death warrant).

DS: Are there any Scottish musicians, past or present, that have influenced you?
Caspin – My dad.
Chet – I think Mogwai deserve credit for totally dominating post-rock. At least from a poppier side as opposed to the awesome empty scariness of Godspeed. Also, nobody did more for the ridiculous tcheuchter stereotype than The Proclaimers. Thanks for that guys.
Jesus – Big Country proved that you can make a guitar sound like bagpipes. I appreciated that. Incidentally, a friend of mine now owns that guitar too. Other than that, Idlewild, Macrocosmica, Del Amitri and John Martyn.
Chet – Oh yeah, good point. ‘Cosmica. Totally immense. Sorely missed.

DS: What will be your first words on stage on the first show of the tour?
Chet – “Is this thing on?”
Jesus – “Uhhhh, does anyone have a power adaptor?”
Caspin – “Bonjour Jim a pel Stirling.”

DS: How do people react when they discover you are Scottish?
Jesus – Foreigners seem to like the accent. Particularly the word ‘murder’… I think we’ve got ‘Taggart’ to thank for that.
Caspin – I live in Scotland so most people aren’t that impressed. Though I was down in London a few weeks ago seeing the wonderful Pearl Jam and with the England vs Germany game near and me with German blood as well as being Scottish I wasn’t too popular.
Chet – They grip their wallets more tightly and usher any children behind them.

DS: What should the Scottish national anthem be?
Jesus – “Nothing Ever Happens” by Del Amitri
Caspin – The one we have is fine frankly it requires too much of my limited brain power to form a proper answer. In saying that our song “Somewhere Along The Line You Became A Bastard” because I’d love to see the Scotland team singing along to it pretending they know the words because I don’t even think Jesus could help them there. Any Jesus.
Chet – “Ebeneezer Goode” by The Shamen

DS: What is the best after-show experience you’ve had?
Caspin – After our show at King Tut’s supporting ‘Qui. I had a shower which felt great then later I sat upstairs drinking and talking to frontman David Yow.
Jesus – We played at Rockness last year, and got to spend the whole time we weren’t playing sitting around on the shores of Loch Ness drinking beer.
Chet – The party show that was filmed for the “Ambulance Chaser” video was a blast, especially trying to pack up before the cops showed up after I somewhat over-zealously ate an ASBO (Anti Social Behaviour Order) in front of the officer that issued it to me. Other than that, yeah Rockness was just a weekend-long party, as the photos of us kidding around in Loch Ness wearing only our pants probably attest to. 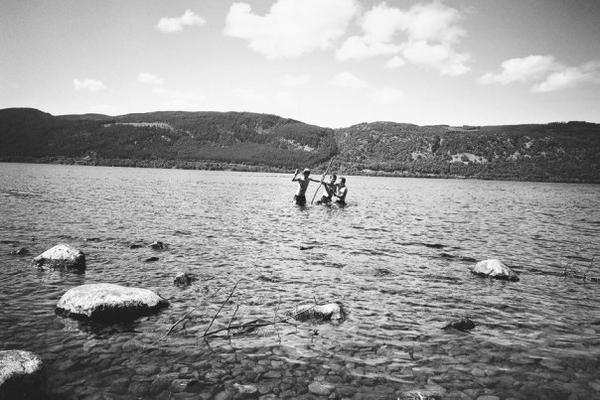 DS: And finally, many many years from now, when you finish your farewell world tour, is there one place to where you would like to retire?
Caspin – I’m nowhere near far travelled enough to make that decision yet.
Jesus – A place of complete mental satisfaction. I don’t mind where that is.
Chet – I’ve long had a thing for north west Spain. Like deep Spain, where they are totally unimpressed by your British credentials and care not a jot for your modern fashions. They have some of the best food I’ve ever encountered up there and when I retire I plan to eat every half hour until death.

 Share this article:  Facebook  Twitter
Silver Columns – 'Yes And Dance' Reviewed By Matthew Young
Back to School with Six of the Best By Billy Williamson