In the end, there is only one place for me to finish – and that’s now. It has taken me just over a year to get here. A year of writing. A year of writing about me. I think I’ve said all I need to say. And I’m ready to move on.

So this is the last chapter. UnReidable wasn’t a mystery novel though so there isn’t going to be any big reveal at the end. I’m just going to reflect on the past 12 months and this writing process.

I was quite excited to start this project. I quickly got into a routine, and the fact that I was able to mark off the chapters as I went along was motivation enough. I could see that I was making headway, and I was enjoying the process.

I would usually spend at least two nights a week writing, and then a few more hours on a Sunday morning too. I had mapped out all of the chapters and moments to write about in advance, but every week I’d start with another blank page.

And then, as it often does, the routine became a bit of a chore. There were many times where I came home after a hard day at work, and I didn’t want to write. But I’d make myself sit down, and eventually words would come.

I didn’t really expect it, but it was heartening to get so many messages of support and encouragement from friends, old and new, along the way. Another strong motivation was the illusion I created of the public shaming I would suffer if I didn’t complete the venture. Of course I know that no one else would give two shits if I didn’t write another chapter, but I would temporarily convince myself that wasn’t true.

And so I churned out a chapter a week for the best part of a year. UnReidable even made the news at one point in Austin, when a video I posted along with a chapter from 1996 went viral. It was shared thousands of times on social media and a local news station interviewed me about the footage for a segment on the nightly news.

The time commitment was a burden for my family too, not least Farah. I couldn’t have attempted something like this, without her patience and her love. It’s hard for me to tell her that I need to be alone for a few hours. It’s hard because I love being together with her. But she somehow understood the lunacy of my task, and she never once made me feel guilty for stepping away from the family. 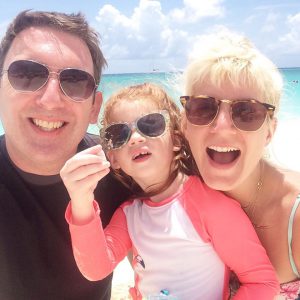 I know I’ve not said enough about Farah in this story. I don’t think I could ever say enough. Since I met her, she has been everything. Without her I’m nowhere. I’m so proud of her, and I’m so proud to be her partner.

My Mum and Dad showed incredible patience too. I’m sure they read some of these chapters with some trepidation, but they accepted it all with grace and understanding.

The letter in Chapter 49 was for my parents. I also wrote a letter to my brother too, but I decided not to include it. I still think about him every day, but I didn’t see the point in sending him a letter. I think about him even more on days like today. March 13, 2017 would have been his 40th birthday.

My daughter Dune is 5 now and she is just starting to read, but she doesn’t know anything about this. Yet. Maybe she will read it one day. I hope she forgives my honesty.

Ah Duney. I’ve not said a lot about her. Since she was about 4 weeks old, I’ve spent every single Saturday with her. Farah always works on Saturdays, so that day has become ‘Daddy Dune Day’. When she was a toddler, I would spend most of the day just hoping that she would take a nap. I managed to keep those afternoon naps going until the summer of 2016, but sadly she naps no more.

As a result, Daddy Dune Day feels like a long day, but I actually look forward to it now. I like hanging out with her. We talk a lot and sing along to pop songs on the radio. She’s one of my best friends. I think the fact that we have always had that day together, has helped us to be close.

We just heard that Dune has been accepted into an all-girls private school here in Austin starting in August 2017. If everything goes to plan, she’ll be there for the next 9 years. I’ll be 51 and she’ll be almost 15 and ready for high school by then. Yeah.

I’ve not said a lot about my business either, but Pete Reid Law is doing well. I’ve been an attorney now for about 12 years, so I think I’m finally getting the hang of it. I’m finally at a place where I can be selective about clients and cases, and it’s not my goal to be working 10 hours a day, six days a week. I’m finally trying to keep a balance between work and everything else. This writing project has been an excellent counterweight. 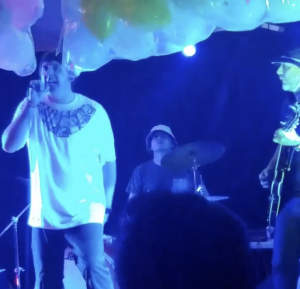 What else happened in 2016? The Cubs won the World Series – I wrote about that. I spent a week in London and Sweden with some of the Pump, and we visited a snowy New York City in December. The year ended with my Oasis tribute band getting back together as a Stone Roses tribute band. We played a show at Hotel Vegas at 11pm on New Years Eve. It was probably the best Hogmanay I’ve ever had.

2016 wasn’t all sunshine for us though. Farah closed one of her two salons, and we suffered an unexpected miscarriage. I’m healthy, but I’ve written about my bouts of depression, and I still suffer from debilitating  vertigo. The vertigo affects me every day and I’ve been suffering from it for almost two years now. I can’t run, I can’t bend over, I can’t make any sudden movements, or if I do I get extremely dizzy. I’ve been to see all sorts of experts, and had hearing tests and CT scans, but no one has been able to tell me why I have it, or how they can make it go away. But I can still function. I can swim, I can work, and I can sleep. Hopefully it will disappear as quickly as it came on, but if it doesn’t that’s ok. I can still write.

And I’m going to keep writing, but just not about me any more. First I am going to take a break and play FIFA 17 on the Playstation solidly for a couple of weeks (username #dearscotland). Then I’ll start thinking about my next project. I’ve enjoyed writing the funny stories, so that might be the direction I go in. But maybe there will be a legal element too. Maybe even sci-fi.  I don’t know yet.

I also don’t know if I have anything profound to say here at the end. I know I’ve learned a lot more about myself. It was great to reflect on my thoughts and feelings as a younger man, and see what had changed and what had not. I still don’t read books, but if anyone else I know wants to write their memoirs, I’ll read it.

But this is the end of UnReidable. It’s not the end of me though. I’m 41 now. So hopefully I’m not even halfway through my adventure. I do feel an enormous sense of satisfaction to be done with this. The dark side of my mind suggests that I could die happy now. Now that my story has been told. But that’s just the way my brain works. Dying is not my plan. I want to be around to write Part 2 of UnReidable in another 40 years’ time.

So it is the end, but it also could be the middle, or it could just be the beginning.