I was in love with Farah from the beginning, but I remember the moment that I decided I wanted to spend the rest of my life with her.

She and I were standing together, waiting for the lights to change so that we could cross a street in Edinburgh in September 2005. And then she kicked me up the arse.

Now, we weren’t playing a silly game, or talking about surprising each other, or doing anything that might make such a thing reasonable. She had never done it before, and there was no warning. I was just standing there quietly, watching the cars pass by, and then she boots me on the bum.

She didn’t take a run-up, and it was just a little flick of her heel, so it didn’t hurt. But I was rather taken aback. For a moment I thought it was some wee Scottish ned having a go. Then I looked over at Farah, who was already doubled up laughing at my reaction. I realized that she was the culprit, and I just thought ‘Yep. She’s the one’.

Fast-forward six months to the spring of 2006. I’d moved to New York City and was living on the Upper West Side, while Farah had stayed in Austin. It didn’t take long for me to figure out that she wasn’t likely to give up everything she had in Austin to join me in New York, unless we had plans to be married. So I started working on a plan.

I thought I should get some advice on such a big decision, so I went out for a drink one night to a dive bar on Atlantic Avenue called Hanks Saloon with my friend Brian Floyd.

For a long time after I met Floyd I didn’t realize he had a first name. Everyone just knows him as “Floyd”. We met in Austin and he moved to New York about a year before I did. I crashed on his couch for the first couple of weeks I was in the city. After I moved uptown, we didn’t see each other that often but I could trust him with anything. Floyd is as honorable and truthful as anyone I know.

He is also a very handsome man and he was enjoying the New York single life at the time. I don’t think he had met Farah back then. So when I told him, after a few beers and over the din of a live honky tonk band, that I was planning on proposing to my girlfriend in Austin, I fully expected him to try and talk me out of it, by telling me about all of the single women in New York City.

But he didn’t. He gave me a big hug and told me how awesome that was. I think he knew how much I missed her. But first and foremost he wanted to know how I was going to propose. I told him I hadn’t really thought about that yet, but I’d probably do something “romantic” like take Farah out for a picnic somewhere, and have the ring hidden in a cake or something. Floyd was very disappointed. I believe his response was something along the lines of “Fuck that PG13 bullshit”.

“Here’s what you need to do”, Floyd went on, “You need to fly down to Austin and surprise her. Sweep her off her feet. Walk into her salon, in the middle of the afternoon, with all her co-workers and clients watching. Get down on one knee and pull out the ring. That’s how you ask someone to marry you.”

I couldn’t argue with him. It wasn’t really my style, but it sounded pretty cool. So that’s what I decided to do.

Once I knew I was going to do it, I started looking in the windows of jewelry shops for the first time ever. Farah has a small tattoo on her ring finger. It’s a design that she made herself and consists of three lines and a square. One day I noticed a wedding / engagement ring set in a jewelry store window on the corner of 42nd and 5th Avenue near my office.

Both of the rings had a band made up of small diamonds, and the engagement ring had a square setting with a larger diamond. With the two rings together it looked a bit like her tattoo. With a third band it would have been perfect, but it was still pretty good.

The rings were a little out of my price range too, but once I’d seen them I couldn’t get them out of my mind. So I got them. The plan was coming together.

Farah’s 30th birthday was approaching on June 17th, and I thought it would be a good idea to propose to her before then. So I booked flights for Austin to arrive the morning of Saturday June 10th, 2006.

I couldn’t sleep the night before my flight. I mean, I had to consider the possibility that she might say “no” to my question. Actually, I thought more about how I would react if she said “no”, than I did if she said “yes”. It wasn’t a pleasant thought.

Farah and I talked at least three times a day when we were living long-distance, but as I was going to be on a flight early that morning I had to make up an excuse as to why I wouldn’t be able to call her. So I texted her and said that I was going to be watching some soccer games all morning and that I’d speak to her later, which wasn’t entirely untrue.

I also thought that the proper thing to do was to ask Farah’s mother for permission to marry her daughter. My early morning flight from JFK to Austin went through Chicago, so I’d decided to call Farah’s mom Deborah between flights. I left it late for two reasons: (1) because I didn’t think Deborah would be able to keep it secret for more than a few hours, and (2) because, well, because I was probably going to do it anyway.

So I called Deborah from O’Hare airport in Chicago. I asked her if she would give me her blessing to propose to Farah. She just started crying. Initially I wasn’t sure if that was a good thing or not. But eventually she gathered herself and said “of course”. Actually she said something like “she couldn’t have wished for a better son-in-law”. And I think started crying a wee bit too.

So far so good. I got on the connecting flight to Austin, and then I really started getting emotional. I remember listening to a song by Elbow called ‘Switching Off’ on my iPod. The song is about the idea that when you die the most important moments of your life flash before you. And that, if that’s true, then maybe you can choose your final thoughts while you are alive. One of the lyrics is:

You, the only sense the world has ever made
Early evening June
This room and radio play.
This I need to save.
I choose my final scene today,
Switching off with you.

I heard that line and I just started bawling my eyes out on the plane. It still gets me. Not sure what the bloke next to me thought I was listening to, but I didn’t care.

My friend Steve Koenig picked me up from the airport in Austin. He was the only other person who knew what I was about to do.

Steve is someone else I would trust with my life. We became good friends when I met the Real Heroes, and even wrote a comedy radio show together once. I visited Austin at least once a month during 2006 and he was usually one of the first people I’d see. Farah worked on Saturdays so Steve and I would go and play nine holes of golf and maybe get a margarita or two while I waited for Farah to finish work. Steve was always there for me and he will always be one of my best friends.

Originally the plan was for Steve to take me straight to the salon, but when I arrived I decided that I needed a couple of Trudy’s margaritas to settle my emotions. The 2006 World Cup was on at the time, and I remember we watched Netherlands v Ivory Coast there for an hour or so, before I decided I was ready.

Steve drove me over to Pink on South Congress where Farah was working at the time. It was June in Austin so it was stupidly hot, and I was wearing a three-piece suit and tie. I also had a bottle of champagne in a backpack just in case she said “yes”.

We parked around the corner. I’ve done a lot of nerve-racking things in my life, but my heart was racing like a rabbit on a rollercoaster as I stood outside that salon, and waited for Steve to confirm that Farah was there. Steve peeked in the door and gave me a thumbs-up.

I took a deep breath and walked in. Farah was standing behind her chair working on a client. Pink was a big salon and it felt like a long walk from the front door to her cutting chair in the back. Farah turned to see me as I approached, and she looked appropriately confused. She kept asking me “What are you doing here?” But I didn’t reply. I walked right up to her, got down on one knee, and said “Farah. I love you. Would you do me the honor of marrying me?”

She just started laughing and saying “Oh my god!” The other girls in the salon were screaming and shouting. I tried to put the ring on Farah’s finger but she was wearing thick black gloves, because she was actually applying bleach to her client’s hair. But she took of the glove and I slipped the ring on. We hugged and then I just had to check with her: “Was that a ‘yes’?” I asked. “Yes”, she replied.

I suppose I expected everything to stop and that we would all just drink slightly warm champagne for the rest of the day, but Farah, ever the professional, told me that she was halfway through her client’s color application and she had to finish it.

So Steve and I went up the street to Guero’s and had another couple of margaritas. It was all a bit surreal. A moment that I had been thinking about for months and months, over in seconds. But she had said “yes” and that was all that mattered. I felt like my entire future was now recalibrating. A new path was opening up, one that I wouldn’t have to walk alone. Love flooded through me.

Later that night we went out for dinner by ourselves, and I was finally able to tell her all about Floyd and the rings. I don’t like secrets, but Farah loves them, so she was very happy to hear all about my plotting. 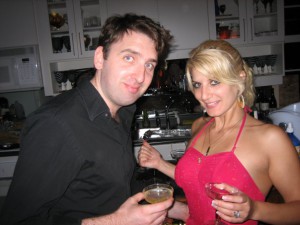 The next day we went to Deborah’s house. She had already bought a stack of bridal magazines and the wedding planning was very much under way. I flew back to New York on the Sunday afternoon, emotionally exhausted, but dreamily happy.

Floyd officiated our wedding on October 20th, 2007. Undoubtedly it was the best day of my life. And that day will get it’s own chapter.

For our 5th anniversary in 2012, I had another wedding band made to match the other two, and fully complement her tattoo. I think it looks pretty cool.

Asking Farah to marry me was the best decision I’ve ever made. She still makes me laugh. She is still as beautiful as ever. And every once in a while she still kicks me up the arse for no reason at all.