I had the worst day of my life on March 13th, 1996, in New Orleans. I can say that with some certainty, and I don’t enjoy reflecting on that day. I didn’t have fun writing this chapter, and it likely wont be a pleasant read either.

For the first half of 1996, I didn’t keep much of a diary. I’d returned to Austin for the second semester of my year abroad at UT Law School, after a miserable Christmas back in Glasgow, and I was struggling. The shock of my brother’s death had subsided, but the reality of the loss was becoming a substantial weight.

In Texas in 1996, the only way for me to talk with friends and family back in Scotland was to place an expensive long-distance phone call to their house, or to write letters and wait for a reply. That meant that I wasn’t really doing anything to address my grief. I was still only 20 years old, and I felt a long way from home.

There was also one date on the horizon – March 13th 1996 – that concerned me. That day would have been my brother Andy’s 19th birthday had he not died six months earlier, and for some reason I had built it up it to be a very significant date.

It was due to fall in the week of spring break, so when some friends invited me on a week-long road trip to New Orleans, I thought that maybe it could be a good distraction.

They don’t have “Spring Break in Scotland. I’d seen MTV Spring Break though, with girls in bikinis and tanned guys in shorts, dancing around and partying on the beach. That looked fun. I also figured that if everyone else was drinking all day, then my own boozing might not be so conspicuous.

So myself and three of my friends from Nottingham University – Elaine, Judith, and Stu – hired a car and set off for San Antonio, Galveston, Houston and eventually New Orleans.

Like total tourists however, we went to downtown San Antonio and downtown Houston at the weekend, expecting it to be like a British city on a Saturday night, and instead there was nobody there. We got to Galveston and couldn’t find a single party. We sat in a bar by ourselves very confused.

Thinking about it now, I must have been the worst passenger for a Spring Break road trip ever. I didn’t talk much during the day and I would get as drunk as possible every night. I seem to remember spending most of the time in the car just drinking cheap beer and staring out the window.

I was very glad that Stu was with me. That whole year in Texas I don’t know what I would have done without him. He was a rock. He didn’t have to be – he was just going to Law School, trying to get an education and have a good time. But he took the time to get to know me. He seemed to understand what I was going through, and I knew that he would keep me right.

I decided that I would just stay drunk and try to forget about March 13th. My head was all over the place. I was homesick. I was tired. I was broke (as usual). I felt like I had a huge ball of emotion bubbling up inside me, ready to burst. And I wasn’t sure if I could get through March 13th without slitting my wrists.

Eventually we made it to New Orleans on the afternoon of Tuesday March 12th and we went straight out on Bourbon Street. Now, growing up in Scotland, I was accustomed to seeing people getting wasted, but there was something about New Orleans that took drinking to a different level. We’d finally found the party, but it was not what we’d expected. 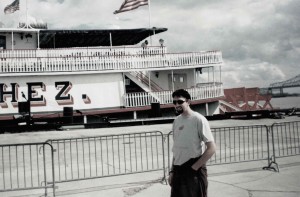 Bourbon Street was packed with people and everyone was shitfaced. There was music blaring from every window and balcony, there were vendors selling fast food and sickly sweet cocktails outside the bars, and everyone was shouting about something. Guys were puking their guts out or getting in fights about nothing. There were people lying comatose on the street, still with their drinks in their hands, and there were dozens of police on horseback ready for trouble. The street stank too. Then there was this whole hostile interaction with groups of guys constantly harassing women to lift up their shirts in return for beads. I hated it. It just felt like a really nasty, ugly atmosphere.

So at some point that first night I separated myself from Stu, Elaine and Judith, who were all in some blues bar drinking Hurricanes out of giant plastic cups with straws, and I went outside and sat on the curb. I was drunk, but it wasn’t a good drunk. I was sick of it all.

A young guy sees me sat there, with my head in my hands, and sits down next to me. We start talking and I tell him I’m from Scotland and how I really just wish I could go and sit in a quiet pub and chill out. The guy tells me he knows just the place and invites me to go with him. So I do. We exit off Bourbon Street and before long we are far away from all the noise and the crowds.

It might be obvious to some what happened next. Well, it started to dawn on me too, as we walked further and further away from the main strip, and into an area that can only be described as ‘up and coming’.

I guess that my survival instincts kick in and I realize that I don’t want my life to end in a gutter in New Orleans. So I start to tell the guy what would happen, hypothetically, if I was ever in a situation where I was being robbed. I tell him that I am sure that he is not about to rob me, but that if I were ever in a situation like that, then I would just calmly put my hands up and let the robber take my wallet. I tell him that I am not the sort of person who would put up a fight or do something stupid.

We keep walking and I start to sober up very quickly. We turn another corner onto a completely empty street with no streetlights. The guy stops me with one hand, reaches into the back of his jeans, and pulls out a gun. Neither of us says a thing as I slowly raise my hands up behind my head. He reaches into my pocket and removes my wallet.

Amazingly, I have more than $20 in my new Urban Outfitters chain wallet. He takes out the cash and replaces the wallet in my pocket. He takes a few steps backward, puts the gun back in his jeans, turns and walks off down the street. I look around and I’m completely alone. I’m relieved, but also pretty shaken up.

Eventually I found my way back to our hotel. I got back before the others and just lay on the bed replaying what had happened in my head. I was still awake when they stumbled in and I told them what had happened. They were angry at me for being stupid, rightfully so, but they knew I was upset and they comforted me.

It started to sink in how close I might have come to being killed. All I was trying to do was have a quiet drink. Then as I talked more with Stu and Elaine, I started to get really scared – worried that we were not even secure in our room. More than anything, I just wanted to go home. And not home to Austin but home to Scotland. All of a sudden, America didn’t feel safe to me any more. Scotland could be cold and depressing, but at least I wasn’t going to get shot.

The next morning, March 13, 1996, the day of Andy’s birthday, Stu woke me up and told me that I needed to see something on the television. The TV in our room was tuned to CNN. I watched as it showed scenes of people running in panic, or consoling each other outside on a street. The headline at the bottom of the screen said that there had been a mass shooting in Scotland that morning. It was the day of the Dunblane school massacre.

Some maniac had walked into an elementary school in the small town of Dunblane in Scotland, and opened fire on a classroom full of 5 and 6 year olds. He killed 16 children and the teacher before he shot himself. That type of thing had never happened in Scotland.

I slumped to the floor at the end of the bed. I can’t describe how I felt. Hopeless was one emotion. I was utterly lacking in any hope. I had wanted to go home because it was the only safe place I knew, and now I didn’t even have that. Undoubtedly it was the lowest point of my life.

I really don’t remember much from the rest of the day. I’m pretty sure Stu and I went straight to a bar and started drinking. We went on an old Louisiana steamboat at some point. Somehow, thanks to Stu, I got through the day without further tragedy.

The next day was better, if only because it could not have been worse. I remember being in a bar early again because the March Madness basketball tournament had just started, and I have some photos of me eating oysters for the first time in the afternoon. We went on a tour of the Superdome and then I think we drove back to Austin on the Friday. 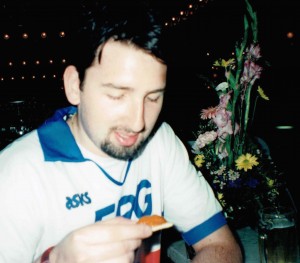 My diary is blank until May 20th, two months later.

Within a year and a half of the Dunblane massacre, the government passed a law banning the ownership of handguns throughout the UK. I realize that I now live in a country where one in three people own a gun, but they still scare the shit out of me.

So that’s it – the worst day of my life. I don’t fear March 13th any more like I did back then, although it’s certainly a day where I will pause for reflection. But it’s been 20 years now. I think I’ve developed the emotional intelligence to not let it get me down. That being said, I still can’t drink a Hurricane, and I’ve never been back to New Orleans.