My Thoughts As An Expat Back In Scotland This Week.

When the date for the Scottish Independence referendum was announced last year, I knew I had to be back in Scotland for the vote. I expected it to be an important constitutional moment. What I didn’t expect was to be moved to tears by the mood of confidence and optimism of the Scottish people.

I have written before about my personal support of independence, and for the last few years I was one of the leaders of the group Americans for an Independent Scotland that helped to inform and raise awareness of the campaign in the States.

Even just over the last few weeks we have had interview queries from ABC, NBC, CBS, FOX and Comedy Central and there is no doubt that the world is watching Scotland right now.

At this point, with less than 24 hours until the polls open, I doubt there is little that I can add to the debate. But as a Glaswegian returning to Scotland this week, I do have a couple of observations about the prevailing mood of the nation and the broader context of this referendum. 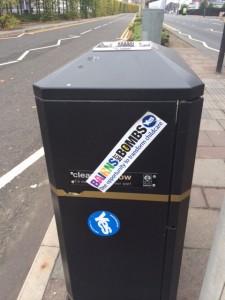 As I write this here in Glasgow, the first point to make is the fact that the referendum is all that everyone is talking about in Scotland. To try and describe the all-consuming nature of this event for Americans: it is like the US Presidential Election, and the Superbowl, and the finale of Breaking Bad, and the final of American Idol, and the OJ Simpson trial all rolled into one. It is everywhere.

You can see and hear people’s opinions on every radio and TV channel, in every pub, in every town center, and in the windows of houses, cars and businesses. And of course it is all over social media.

But more than the visual representations, there is something even more powerful and obvious, and that is the overwhelming atmosphere of engagement in the process, and a belief that things can be changed for the better.

I’ve written before about how self-confidence is not a natural trait for us Scots. But in the last year things have gradually changed. Little things like Andy Murray winning Wimbledon, and then Glasgow hosting the Commonwealth Games with aplomb may have contributed.

I was in Dortmund last week to see the Scots go toe-to-toe with the World Champions and I was in Edinburgh on Sunday at the ‘A Night For Scotland‘ concert. To witness so many thousands of Scots stand together, infused with self-belief was really emotional for me. Something I will never ever forget. Importantly it is not an anti-English feeling or a belief that Scots are better than anyone else. Rather I see it as a belief that Scots are as good as anyone else. And that to me is a significant step forward, regardless of the outcome. 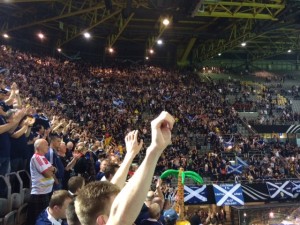 The other prevailing mood is fatigue. Scots have been discussing the issues for months, if not years. At this point, friends have fallen out over it, members of families are watching TV in different rooms, and co-workers are sick of the sight of each other. The one thing that almost everyone can agree on is that they are glad that this will finally be over on Friday.

The recent actions of the Westminster establishment have been interesting too. I was in Germany when news came through about ten days ago that the Yes campaign were ahead in one of the polls for the first time. Almost immediately it seemed that Westminster began to take the referendum seriously for the first time.

The threats of financial insecurity were ramped up. There were warnings of economic meltdowns and massive job losses in the event of a Yes vote. And then the three leaders of the main political parties in Westminster took it in turn to visit and tell the Scottish people how important they were, and that if they would agree to continue in the union then they would get some more powers (although they cannot agree or define what those powers might be).

The best analogy I’ve heard of Westminster’s last minute actions is that it is not unlike the end of a failing marriage.

Arguably the Kingdom of Great Britain was an arranged marriage between Scotland and England that was thrown together more than 300 years ago. But it has never really been an equal relationship. How could it be when there are 53 million in England and only 5 million in Scotland?

For years many Scots feel like they have been neglected, even abused by the bigger stronger partner. And now they’ve told him that they’ve had enough and they are thinking of leaving.

The reaction of Westminster for the last couple of years has been arrogance (“It’ll never happen”) or to just ignore it. Then more recently there has been the emotional blackmail (“Who is going to support you?”, “Who is going to defend you?”, “Where are you going to get your money from?”, “You’re can’t use any of our money because it’s in my bank”). And now Westminster is begging them to stay: (“We’re sorry we’ve ignored you, we’ll pay more attention to you now”, “We’ll change, we promise”, “You can go out with your friends once a week ok?”).

Personally, I think we need a divorce and that both parties would survive and thrive on their own. If it doesn’t happen tomorrow it will happen eventually. Obviously not everyone agrees with me.

Above all, whatever happens I am so proud of Scotland right now. Not just for the fact that everyone is so engaged in the process, or for the new-found confidence, but for the way that this whole process has been conducted.

Yes there have been arguments, fallings-out, and a few broken eggs, but there has been no blood shed and no violence. The national debate and the referendum journey has been a model for self-determination that is the envy of the World. That such a fundamental question can be resolved so democratically is of monumental credit to us. The World is watching on in admiration.

Let me stress that again. The people of Scotland have shown the World how fundamental questions of nationhood and identity should be addressed and resolved. This is a hugely significant achievement.

One might even suggest that the fact that Scots can manage such a difficult process proves that the we are more than capable of running our own country. Indeed it may even be easier.